Young Dirt was born and raised in the Carolinas, Hip Hop Artist Young Dirt (born C.J. Ross) has overcome much adversity in his life ranging from the sting of lower class 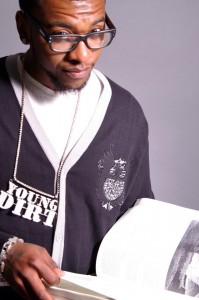 upbringing to losing close family members during adolescence, and finally reaching an early adulthood with the birth of his daughter. Through it all, Young Dirt sought refuge in the studio, starting out simply with a computer mic and cool edit pro,
and currently working with some of the top professional recording studios from North Carolina to Atlanta, Georgia, and even as far as Nebraska and overseas. Through a brief stint in the military, Young Dirt expanded upon his fan base and also added experience to his life’s stories and personal viewpoints of which each song so earnestly and individually portrays. There is always a large range of genre in the artist’s arsenal which makes his appeal larger than the average. Elements from historical East-Coast Hip Hop and R&B are fused with those of Dirty South, Alternative, and even as far left as Rock and Roll and Heavy Metal!

The young entrepreneur not only is an avid song writer (for himself and others) and recording/performance artist, but also has actively participated in the production of every mixtape song as the solo engineer and put in part time work as a producer, proving himself to be a true triple threat in the music industry. Currently, Young Dirt is the CEO of G.H.S.L.(Grind Hard Sleep Less) Fam Int’l, a subsidiary of the up and coming DRS Productions Franchise. He is under the management of LB Management & Promotions and is currently working on his first official studio album with DRS Productions which will be distributed by Universal Records and Vyzion Entertainment.

Since just the last year Young Dirt’s accolades have elevated from becoming 3x reigning champion of the Carolina Showcase Showdown in Greensboro, NC to featuring in a performance scene of “The Return”, an LPT Films movie currently in production, to a feature slot on “The P.O.”, an LPT Films television series launched Spring 2011, and more recently working with the likes of PressPlayMusiq of Berlin, Germany (producer for the likes of Lady GaGa, and many other pop sensations), Burn Unit Records engineer Boss Smit of Durham, NC(producer and engineer for many industry icons), J-Hood (formerly of D. Block) and a host of other upper echelon musical entities. Also the name has become a regular with Big City (of TalkToCity.com internet radio show), Blaq & Wyld (of the Blaq N Wyld internet radio show), Vyzion Radio, and other radio stations spanning from the eastern sea board as far as St. Louis and Kansas City in the Midwest and even sprinkled throughout the west coast. In 2011 the highly anticipated freshman album from the young artist will be released, rightfully titled “Freshman Of The New School”! The first release from the album is available for stream currently on Youtube “Born Alone/Die Alone” produced by D-Money Beatz, and is actually an album B-side released for promotional purposes. The first single is projected to drop in the late August/Early September timeframe with the release of the album.