According to Disney sources, Bob Iger stated “ this will be our largest single themed land expansion ever. These new 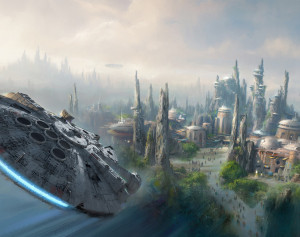 lands have Characters like Darth Vader make syncing a movie somewhat easier, because they deliver their lines behind a mask at Disneyland and Walt Disney World will transport guests to a whole new Star Wars planet, including an epic Star Wars adventure that puts you in the middle of a climactic battle between the First order and the Resistance”.

The land needed for the Star Wars expansion project will cover over 14 acres of land. According to sources the park is going to be unbelievable giving the fans a feeling as if they are a part of Star Wars. One of the rides will allow you to be in the Millennium Falcon. There will be another one that will put you in the scene of the new movie The Force Awakening.

All employees will be walking around as Star Wars characters and aliens. If you’re Star Wars fans from the first episode the last episode then this theme park should satisfy you.

The completion date for this massive Star Wars park has not been released, but should draw a lot of international and galactical Star Wars fan attraction.

Disney so far is doing a great job with keeping the George Lucas Star Wars trilogy alive. This could be a sign of many more future Star Wars movies to come. Star Wars is one of the all-time top movie trilogies. This move by Disney just puts the icing on the cake. So for you Star Wars fan stay posted because from the looks of it his theme park should be just as packed as the movie theaters. May the force be with you. What you think?