Alright, everyone, we have reached week 2 of the blind auditions of The Voice.

Although not all performances were aired tonight, there were 11 artists selected to continue on The Voice.   Here is your recap of the Monday night show!

The Swon Brothers, Zach and Colton, come from Oklahoma and have always been around music.  They got their start by singing in the 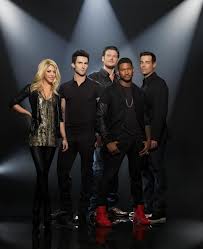 church and singing with their parents in a gospel group.  The brothers had a dream of going to Nashville and they pounded the pavement trying to get a deal with no luck.  The brothers performed “American Girl” by Tom Petty.  Although, 3 judges turned around for them, including Shakira and Usher, they will be part of Team Blake.  Follow them on twitter @TheSwonBrothers.

Taylor Beckham actually trained to be an Olympic gymnast from ages 6 to 12. However, she realized gymnastics was no longer her dream.  At 17 years old, she said she was more nervous to sing on that stage than she ever was when she was doing gymnastics.  She performed “I’m Going Down” by Mary J. Blige.  Both Shakira and Usher admired her discipline.  She will be coached by Usher.  Follow her on twitter @taybeckham.

Karina Iglesias is a vocal teacher where the motto is learn the music you love.  Growing up, she used to sing with her grandmother, especially at church.  For her blind audition, she performed “I’m the Only One” by Melissa Etheridge.  Although it took almost the entire 90 seconds of her performance, Adam and Blake both turned their chairs for her.  She will be part of Team Adam this season.  Follow her on twitter @karinaiglesias_.  Yes, that is her entire twitter handle.

Coming back for his second audition, Garrett Gardner is now singing for a different reason.  For his season 3 audition, he was singing in memory of his father who had recently passed away.  However, this time, he was singing for himself because he knew that he had already made his dad proud.  After taking the advice from Blake Shelton last season, he performed “Seven Nation Army” by The White Stripes for his season 4 blind audition, except with a reggae twist.  He will be coached by Shakira.  Follow him on twitter @garrettgardner2.

J’Sun ended up on Team Shakira.  Born in Brooklyn, J’Sun sees himself more as a pop and R&B artist with his own little flair.  His performance was not shown during the shows airing.  I will let you his twitter handle in a later update.

Duncan Kamakana is a Hawaiian folk singer.  Although his performance of “Home” by Michael Buble was not aired in its entirety, he will be part of Team Adam.  Follow him on twitter @duncankamakana.

Chelsea M.  performed “Take A Bow” by Rihanna.  Although her performance was not aired, she will be part of Team Usher.  Follow her on twitter @chels_em.

Holly Tucker is in a marching band, but looking to stand out in a crowd.  Her earliest performances are with her parents and singing with them as a trio.  She performed “Make You Feel My Love” by Adele.  Within approximately 30 seconds of her performance, all four coaches had turned around in an effort to fight for her.  She decided to be coached by Blake this season.  Follow her on twitter @hollytmusic.

Michelle Chamuel owns her nerdiness and she wears it well.  Although she calls herself an introvert, she performs in a band called Ella Riot.  She performed “I Kissed A Girl” by Katy Perry on the show.  Although it appeared she would be performing a slower version of the soon, she soon broke into a more rock version.  With three coaches turning around for her, she finally selected to be on Team Usher. Follow her on twitter @michellechamuel.

Monique Abbadie is a former child star.  She currently works with her dad, while balancing school at the same time.  She performed “Loca” by Shakira and she actually has a photo with Shakira from a concert she attended when she was 10 years old.  All of the coaches turned around, but she selected to be coached by Shakira.  Ironically, the other 3 coaches voted for her to be on Team Shakira.  Follow her on twitter @moniquesongbird.

Warren Stone was the last artist to perform the night of Monday, April 1.  He’s a firefighter from South Carolina.  He had been in a band for 13 years, but he stopped in order to be a better father to his children.  For his blind audition, he sang “Colder Weather” by Zac Brown Band.  Adam, Shakira, and Blake turned around during Warren’s blind audition.  Although a country artist at heart, he will be part of Team Adam this season.  Follow him on twitter @wsmusicsc.