Although just airing for an hour on Tuesday, April 2, The Voice was a packed show with more amazing artists.  For the performances not aired tonight, please visit http://www.nbc.com/the-voice/ to view them. 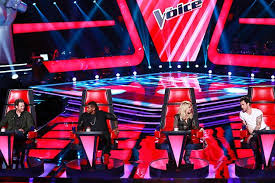 Here is your recap of the Tuesday night The Voice show!

Audrey Karrasch has been modeling since age 17, but she admits it is a very superficial world.  She decided that all she needed was music to make her happy.  With that in mind, she moved from New York City to Charlotte, NC.  She loves the music scene there and has been part of various gigs.  She performed “Price Tag” by Jesse J.  Immediately, Blake turned his chair in support her.  However, he had ended up in a battle with Usher.   In the end, Usher got his next artist for this season.  Follow Audrey on twitter @audreykarrasch.

Brandon Roush performs in a band and works with autistic children in a music program.  He was most excited about The Voice because the coaches were not able to see what he looked like.  He performed “With a Little Help From My Friends” originally by The Beatles.  However, the song won fame with a new generation as the Joe Cocker version was used as the theme to The Wonder Years.  He will be a member of Team Shakira.  Follow him on twitter @thebrandonroush.

Patrick Dodd has been involved with music since he was 18.  He married his middle school sweetheart.  However, after taking some years off, his family is his motivation to get back into the music scene.  He won the 2011 Entertainer of the Year for Bill Street in Memphis, TN.  He performed “Walking in Memphis” by Marc Cohn.  Adam and Shakira had the pleasure of fighting for the opportunity to coach Patrick this season.  In the end, he will be coached by Adam.  Follow him on twitter @patrickdodd77.

Trevor Davis performed “Keep Your Head Up” by Andy Grammer.  His performance was not shown in its entirety, but he will be coached by Blake.  Follow him on twitter @trevordavislive.

C. Perkins performed “All Because Of You” by Ne-Yo.  His performance was not aired, but he is part of Team Shakira.  Follow him on twitter @cperkins504.

Agina Alvarez performed “Beautiful Liar” by Shakira.  Although her performance was not seen, she is now part of Team Adam.  Follow her on twitter @aginamusic.

Orlando Dixon grew up in a single parent home and wants to make a name for him in the industry.  He has been singing from a young age and wants to be able to help his mother and sister have a better life.  He performed “So Sick” by Ne-Yo.  In the end, only Usher turned around and therefore, Orlando will be part of Team Usher.  Follow him on twitter @orlandodixon.

Savannah Berry has been posting covers on YouTube since she was 14.  One of her covers got the attention of Sugarland and she got the opportunity to perform with them.  For her blind audition, she performed “Safe and Sound” by Taylor Swift.  Although she was the last performer of the night, she left a lasting impression on the coaches.  Although Adam and Shakira both wanted her on their teams, she chose to be coached by Blake.

For more stories on The Voice please visit vyzionradio.com or www.nbc.com/the-voice