The Voice has entered week 2 of the Battle Rounds.  The coaches are still working with Hillary Scott from Lady Antebellum (Team 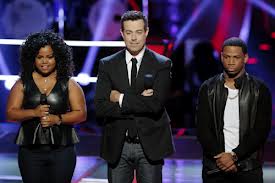 Although tough and strategic decisions had to be made, The Voice tonight did not disappoint with many epic performances.  Here is your recap from the night of Monday, April 22, 2013!

The duo of Midas Whale and Patrick Dodd performed “Burning Love” by Elvis Presley.  Adam selected them to perform together because they have a distinct identity and he knew the performance would be fun.  Although Midas Whale is working on harmonizing, Patrick is working on harmonizing with the duo.  During one of the final practices, Adam added a bluegrass feel to the song and all the artists loved the idea.  At the end of the performance, Adam chose Midas Whale to remain on his team.  Follow them on twitter @midaswhale.

Luke Edgemon and Monique Abbadie performed “You and I” by Lady Gaga.  She picked an eclectic song for them because they are an eclectic musical couple.  Although Monique is getting used to singing in English, Luke is getting used to singing a more rock song that was selected for them.  Although a very shocking performance, Shakira eventually selected Monique to continue on her journey on the show.  Follow her on twitter @moniquesongbird.  Blake and Usher fought hard to steal Luke, but Luke decided to let Blake coach him for the rest of the season.  Follow him on twitter @lukeedgemon.

C. Perkins and Kris Thomas performed “It Will Rain” by Bruno Mars. She paired them together because they both sing R&B and she wanted to give them a song with an edge.  Shakira was very interested in both of them feeling the music instead of them showing off in the music.  After a stirring performance, Shakira wanted Kris Thomas to remain on her team.  Follow him twitter @kristhomasmusik.  As C. Perkins was walking out of the studio, Usher was still able to steal him from Team Shakira.  Follow C. Perkins on twitter @cperkins504.

Jacqui Sandell and Savannah Berry performed “Little White Church” by Little Big Town.  Although Jacqui is worried about hitting high notes, she needs to bring her confidence.  Savannah was missing her timing during the first performance.  However, by the time the performance day arrived, they were both ready to tackle the song and give it their best shot.  In the end, Blake selected Savannah to remain on his team.  Follow her on twitter @savannahberry15.

Jessica Childress and Vedo performed “Locked Out of Heaven” by Bruno Mars.  They were paired together because they are very different as artist coming from two different genres.  Although Jessica is not used to singing the song and Vedo seemed to tackle it immediately, the first performance of the night was one to not to be forgotten.  With a difficult decision, Usher decided to keep Vedo on his team.  Follow him on twitter @vedothesinger.

Orlando Dixon and Ryan Innes performed “Ain’t no Sunshine” by Bill Withers.  They were paired together because they are at two different ends of the music spectrum.  However, their coach felt like they would both be able to learn from each other.  Although an extremely hard decision for Usher, he ultimately decided to have Ryan Innes remain on his team.  Follow him on twitter @ryaninnes.  Adam stole Orlando and will now be his coach.  Follow Orlando on twitter @orlandodixon.