This week on The Voice can eliminate Shakira and Usher from winning the competition.  How?  Well, each of those coaches only have one artist left on their team, while the two previous winning coaches (Blake and Adam) have all 3 of their artist remaining.  Depending on how we 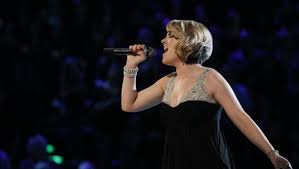 vote this week, we could essentially eliminate Shakira and Usher from the competition.  Last week, Usher lost Josiah Hawley and Shakira lost Kris Thomas.  With the stakes as high as they are for their team, al the coaches made sure their artists brought their best voice to the stage.

Amber Carrington (@ambercarrington) was the final performer of the night and she performed Adele’s “Skyfall” from James Bond fame.  Although a challenge for her because it was more dramatic, she really tried to reach those notes.  However, Blake Shelton said it best, she is still a country artist and it was obvious during the performance.

Judith Hill (@judith_hill) started the show off for the artists by performing “#ThatPower” by Will.I.Am and Justin Bieber.  Not only did she chock her coach with that song choice, but she also changed the arrangement of the song.  That was an absolutely perfect way to start the show and her hair and wardrobe tonight was absolutely awesome!

Sarah Simmons (@sarahsimmusic) performed “Somebody That I Used to Know’ by Gotye.  Although she realized this song was a different medium for her, she was used to that since she is a painter.  She was really able to connect with this song because of a personal struggle she is going through right now and it showed while she was on stage.

Michelle Chamuel (@michellechamuel) performed “Grenade” by Bruno Mars.  She wanted to since this song because she wanted to sing it from a different angle and bring new life to the song.  During rehearsals, Usher stripped down the song so that her voice could shine through and be the stronger instrument.  It absolutely worked and she performed that song like only she could.

Sasha Allen (@sashaallenmusic) performed “Without You” by David Guetta ft. Usher.  Although her coach believes she already had a breakout performance, she was looking to give her another one.  Allen has a way with her voice that sucks you into any song and tonight’s performance was no different.

Danielle Bradbery (@dbradbery) performed “ Grandpa” by The Judds.  Her voice does not show she is the youngest contestant in this competition.  Not having any memory of either of her grandfathers, this song touched her heart.  Keeping the performance simple was perfect for this song and she nailed the lyrics, even though she was having issues in rehearsals.

Holly Tucker (@hollytmusic) performed “Done” by The Band Perry.  After seeing her on the show for weeks, it is hard to believe that she was once considered to be shy.  The song is a more edgy song for her, but she felt she was ready to try something new.  She gave the song the attitude it deserved and totally rocked the performance.

The Swon Brothers (@theswonbrothers) performed “Seven Bridges Road” by The Eagles.  Blake even compared them to the modern day Eagles because of their harmony.  As the only duo that has ever made it this far in the show, they are always willing to take risks to keep their fans wanting more.  With the perfect setting for the performance, the brothers did not disappoint and were able to harmonize like only they can.