Then there were 10.  During last Tuesday night’s elimination show of The Voice, Garrett Gardner and Vedo were sent home.  This week the advisors Hilary Scott, Pharrell Williams, and Sheryl Crow returned to the show.  However, due to filming of The Voice Australia, 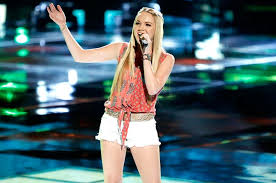 Joel Madden was not able to return.

His replacement is CeeLo Green, a veteran coach of the show.  With the help of their coaches and advisors, Monday’s show was one to not be missed.  However, if you did miss anything, here is your recap from Monday, May 20, 2013 of The Voice!

Tonight, Maroon 5, fronted by Adam Levine opening the show by performing “Love Somebody”.  This is the band’s third time performing on the show and each time, the song has been number one.

Amber Carrington (@ambercarrington) performed “Breakaway” by Kelly Clarkson.  The song mirrors her life so much and you could hear the feeling in her performance.  Adam was looking for a breakout performance and she was able to do so with that song.  The performance came at the right moment.

Judith Hill (@judith_hill) performed “The Way You Make Me Feel” by the late Michael Jackson.  Jackson was such a huge part of her life because she was one of his background singers and performed at his memorial service.  Although initially torn about singing the song, she executed it in a way that only she could.

Sarah Simmons (@sarahsimmusic) performed “Mama Knows Best” by Jessie J.  This song gave her a chance to show off more vocal ability and also show a rougher side to her performance.  She hit the ground running with this song by nailing the first note.  She rocked the song and left her emotion on the stage.

Josiah Hawley (@josiahhawley) performed “Clocks” by Coldplay.  Usher wanted him to make the song more personal during practice and he was able to do so during his performance.  Although he was playing the guitar, he was able to get away from that for a little while and interact with the crowd.  It was a perfect for him.

Michelle Chamuel (@michellechamuel) was the final performer of the night with “Just Give Me A Reason” by Pink.  The song is full of emotion and able to show her range.  During her performance, she owned the stage and let her emotions flow, while adding her own special twist.

Kris Thomas (@kristhomasmusik) performed “Adorn” by Miguel.  Shakira wanted him to explore a more sexy side, even though the arrangement of the song was more upbeat.   However, even though this was different arrangement then he was used to hearing, he was still able to make it a smooth love song.

Sasha Allen (@sashaallenmusic) performed “Next to Me” by Emeli Sandé.  Allen is used to performing classic hits and Shakira felt it was time for her to perform something modern.  Since this was something new for her, you could hear her nerves, but she ended the song so powerfully.

Danielle Bradbery (@dbradbery) performed “Heads Carolina, Tails California” by Jo Dee Messina.  Although this is a more mature subject matter because she is the youngest in the competition, Bradbery needed to make a connection to the song.  Still keeping up the up tempo of the song, she was still able to make an intimate connection with the song and the audience.

Holly Tucker (@hollytmusic) started off the show for the artist by performing “How Great Thou Art”.  Although performed by countless singers, she put more of the Carrie Underwood spin on the song because of her country roots.  Tucker is not ashamed of her faith and jumped at the chance to perform the song.  During the performance, it was easy to hear her connection to the song and its meaning.

The Swon Brothers (@theswonbrothers) performed “How Country Feels” by Randy Houser.  True country boys, they deliver epic performances each week and this week was no different.  However, you can always count on them to add some pop to their music so that it does not just seem like they are sticking to one genre.