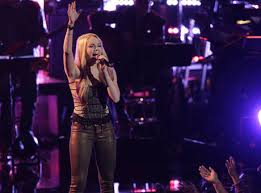 America, it’s your turn to vote and make sure your favorite is crowned the new champ!  Here is your recap from Monday and Tuesday, May 7, 2013 of The Voice!

Amber Carrington (@ambercarrington) performed “Stay” by Rihanna ft. Mikky Ekko.  Even though she was the first performer, she set the bar high with her soft rendition of the song.

Carolina Glaser (@carolineglaser) performed “The A Team” by Ed Sheeran.  Although the subject matter of the song is dark and heavy, her light voice offered a great contrast to the subject matter.  Usher even called her voice soothing.

Judith Hill (@judith_hill) performed “Feeling Good” by Nina Simone.  She was the final performer of the night and you could tell she had waited to perform.  It was as if she just had to get that song out of her and she commanded your attention on the stage.

Sarah Simmons (@sarahsimmusic) performed “Angel” by Sarah McLachlan.  Although the song was selected by her coach, it was an emotional song for her to perform.  You could feel her emotion in each note.

Cathia (@cathissings) performed “I Have Nothing” by Whitney Houston.  Although she is a Latin artist, her coach felt that with her voice, she would have no problem tackling the song.

Josiah Hawley (@josiahhawley) performed “Starlight” by Muse.  Josiah broke out the guitar during his performance.  It was great to hear a more rock side in his voice and he owned the stage.

Michelle Chamuel (@michellechamuel) performed “True Colors” which was originally performed by Phil Collins.  Although we are used to seeing her inner rocker chick, it was very refreshing to see this softer side.  Plus, with those new glasses, she still was her unique self.

Vedo (@vedothesinger) performed “Against All Odds” by Phil Collins.  Although he was not familiar with the song, that was not evident during his performance.  He was able to captivate the audience

Garrett Gardner (@garrettgardner2) performed “Imagine” by John Lennon.  During his performance, he played the piano and really moved the audience.  He was the first performer of the night and he really opened up the show with a beautiful piece.

Karina Iglesias (@karinaiglesias_) performed “Let’s Stay Together” by Al Green.  Although she likes pop music, Shakira decided on a more soulful song because of her voice.  The new arrangement, although a soulful song, allowed Karina to use her pop voice!

Kris Thomas (@kristhomasmusik) performed “When I Was Your Man” by Bruno Mars.  Although nervous during his performance, he still gained rave reviews from all the coaches.  Known for his high voice, he was able to deliver the song in his own way.

Sasha Allen (@sashaallenmusic) performed “Oh, Darling” by The Beatles.  As the final performer of the night, she closed out the show with a bang.  She hit a note that brought the audience to its feet.  She has such a powerful voice and was a perfect way to end the show!

Danielle Bradbery (@dbradbery) performed “Maybe It Was Memphis” by Pam Tillis.  Although not known to her generation, she delivered a powerful version of the song.  If you’re like me, you would not guess this was just her fourth performance ever.

Holly Tucker (@hollytmusic) performed “How Do I Live” by LeAnn Rimes.  Her strong voice fit perfect for the song and she showed her new confidence while performing. Each performer has a moment that is their breakout moment, and hers happened during that performance!

Justin Rivers (@justinrivers) performed “Meet In the Middle” by Diamond Rio.  Although not a pure country voice, Blake wanted him to explore that part of his music.  Justin was able to engage the audience and keep their attention from start to finish.

The Swon Brothers (@theswonbrothers) performed “Fishing In the Dark” by Nitty Gritty Dirt Band.  Although two very different voices, they blended so well during the performance.  Blake was the only coach familiar with the song, but all the coaches were drawn into their music.