Live shows for Season 4 of The Voice started on Monday, May 6, 2013! Monday night was all about Team Adam and Team Usher.  I will add to this article Tuesday night so you can be up to date during the elimination show on Wednesday.   I was super excited.  The fate of 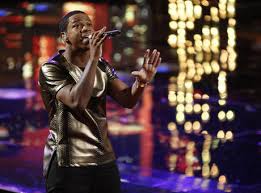 the 16 contestants are now left in the hands of the fans.  There are no second chances and we will vote for our favorite until someone takes the crown as Season 4 winner of The Voice.  Let me help you out and tell you how this part is going to work – one person from each team will be eliminated.  America will vote to save two people from each team.  Out of the bottom two (you will never know who received the least votes), each coach will select one.  After this process is complete, there will be 12 singers remaining on the show!  Also, the live shows are a chance for the coaches to perform together, the teams to perform together, and for guests to come to the show and perform with the contestants.

Even though I find it hard to believe you missed the show, here is your recap of The Voice!

Amber Carrington (@ambercarrington) performed “Stay” by Rihanna ft. Mikky Ekko.  Even though she was the first performer, she set the bar high with her soft rendition of the song.

Carolina Glaser (@carolineglaser) performed “The A Team” by Ed Sheeran.  Although the subject matter of the song is dark and heavy, her light voice offered a great contrast to the subject matter.  Usher even called her voice soothing.

Judith Hill (@judith_hill) performed “Feeling Good” by Nina Simone.  She was the final performer of the night and you could tell she had waited to perform.  It was as if she just had to get that song out of her and she commanded your attention on the stage.

Sarah Simmons (@sarahsimmusic) performed “Angel” by Sarah McLachlan.  Although the song was selected by her coach, it was an emotional song for her to perform.  You could feel her emotion in each note.

Cathia (@cathissings) performed “I Have Nothing” by Whitney Houston.  Although she is a Latin artist, her coach felt that with her voice, she would have no problem tackling the song.

Josiah Hawley (@josiahhawley) performed “Starlight” by Muse.  Josiah broke out the guitar during his performance.  It was great to hear a more rock side in his voice and he owned the stage.

Michelle Chamuel (@michellechamuel) performed “True Colors” which was originally performed by Phil Collins.  Although we are used to seeing her inner rocker chick, it was very refreshing to see this softer side.  Plus, with those new glasses, she still was her unique self.

Vedo (@vedothesinger) performed “Against All Odds” by Phil Collins.  Although he was not familiar with the song, that was not evident during his performance.  He was able to captivate the audience

Team Shakira and Team Blake are on deck for Tuesday.  See below for the list of contestants!