The first week of the Live Playoffs are over and only 12 artists remain on The Voice.  Now the total Live Shows are on The Voice.  There are no more saves from the coaches.  So, no matter what team they are on, two people are going home.  Basically, 2 people from a team could 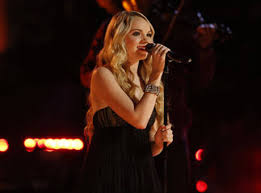 be going home tomorrow.  Last week,   Carolina Glaser, Justin Rivers, Karina Iglesias, and Cathia were all eliminated.  Also, last week it was discovered there was discrepancy in the text voting.  Therefore, the votes via text message were thrown out.  However, it was certified that those votes did not change the outcome of the elimination show that took place Wednesday night.  Now, you are officially caught up from last week.

Amber Carrington (@ambercarrington) was the final performer of the night.  She performed “I’m A Love You Through It” by Martina McBride.  Although she enjoys singing music of any genre, she is a country artist at heart.  This song means a lot to her and she expressed her emotion through her performance, since it was a dedication to her mom.

Judith Hill (@judith_hill) performed “You’ve Got A Friend” by Carole King and James Taylor.  She performed the song without any help from the band and she played the piano.  It was such a powerful performance with the song, the music, and the feeling of the audience.

Sarah Simmons (@sarahsimmusic) performed “The Story” by Brandi Carlile.  She loves to experiment with different music and this song was a different tone for her.  As one of the most intimate performances of the night, she made a connection with the audience like no other artist.

Josiah Hawley (@josiahhawley) performed “The Man That Can’t Be Moved” by The Script.  Although a pop song, he did an acoustic version that was simply amazing.

Michelle Chamuel (@michellechamuel) performed “Call Your Girlfriend” by Robyn.  She admits to having stage fright, but she is always able to challenge that to have an awesome performance.

Vedo (@vedothesinger) performed “Rock With You” by Michael Jackson.  Due to his love of dancing, Usher also brought in a choreographer to help with his dances moves.  He was the first performer of the night.  Although dancing typically takes away from the performance, Vedo working it into his music perfectly.

Garrett Gardner (@garretgardner2) performed “I Want it That Way” by the Backstreet Boys.  Since he is more of a rocker, his coach wanted him to take the song and turn it into more of a rock song.  Although not a favorite song choice of the other coaches, the performance was flawless.

Kris Thomas (@kristhomasmusik) performed “I’ll Be There” by The Jackson 5.  He has the ability to go from full tone to falsetto and this song will let everyone see his range.  Although the arrangement was for the original version of the song, there was a hint of the version made popular by Mariah Carey and Trey Lorenz.

Sasha Allen (@sashaallenmusic) performed “Alone” by Heart, and late performed by Celine Dion.  Although sounding more like a Broadway performer during practice, she was able to sound more like a pop artist during her performance.   She constantly continues to improve and show her powerful voice.

Danielle Bradbery (@dbradbery) performed “Wasted” by Carrie Underwood.  Blake wanted to test the limits of her voice and she proved tonight she still has the ability to sing difficult notes.  During her performance, she looked like she was enjoying her song and she never appeared to be nervous.

Holly Tucker (@hollytmusic) performed “Broken Wing” by Martina McBride.  It’s a heartfelt song and she needed to connect with it more.  However, when she got on stage, she had no problem connecting with the song or with the audience.

The Swon Brothers (@theswonbrothers) performed “Who’s Going to Fill Their Shoes” by George Jones.  They felt this would be a great tribute for him since he recently passed away.  With a very mellow version of the song and a picture of George Jones in the background, you could not help but not feel the emotion in the lyrics.