Can you believe we are in the Knockout Round of The Voice?  This season seems to be going by so fast, but the talent has been the likes we have never seen before.  Not familiar with how this round works?  Well, let me help you out.  This is the last chance for the coaches 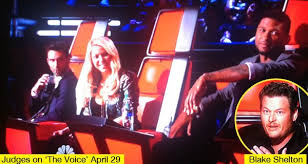 to have their say about their team before America gets the chance to start voting.  In this round, the coaches, Adam, Shakira, Blake, and Usher, select two members from their team to do a sudden death battle.  This is the first time the contestants get to make their own song choice since their blind audition.  One person gets to stay, one person goes home.  It’s that simple.  There are no second chances and the other coaches do not get the opportunity to steal.  By the end of the Knockout Round of The Voice, each coach will have 4 team members remaining and then starts the battle with each other.

Now that we have cleared that up, here is your recap from The Voice on Monday, April 29, 2013.

Amber Carrington was paired with Midas Whale.  She performed “I’m With You” by Avril Lavigne.  She has a personal connection with the song because of a low period in her life.  You could feel her emotion as she performed the song.  Midas Whale performed “Higher Ground” by Stevie Wonder.  They selected this song because it is out of their comfort zone and they wanted to take a risk.  Although an interesting song choice, it was not their best performance.  Amber was selected the winner of this round.  Follow Amber on twitter @ambercarrington.

Amy Whitcomb was paired with Caroline Glaser.  They are so different and yet they are great friends.  Amy performed “House of the Rising Sun” by The Animals.  She wanted to show off her entire voice range and that song allowed her to do so.  Caroline performed “Little Talks” by Of Monsters and Men.  Caroline wanted to show off a bigger range.  Although both contestants did a great job, ultimately Adam selected Caroline to remain on his team.  Follow her on twitter @carolineglaser.

Judith Hill and Orlando Dixon were paired together.  Judith performed “Always On My Mind” by Willie Nelson.  She thinks about her grandmother when she sings this song.  Orlando performed “All My Life” by K-Ci and Jojo.  Although a powerful performer, Orlando has to pull back some to keep the soft melody of the song.  Adam kept Judith on the show.  Follow her on twitter @judith_hill.

Sarah Simmons and Warren Stone were the final pairing for Team Adam.  Warren performed “(I Just) Died in Your Arms Tonight” by Cutting Crew.  He had many emotions running through him while performing this song.  Sarah performed “Wild Horses” by The Rolling Stones.  The song flowed from her heart because of its connection with her dad.  In the end, Adam selected Sarah to remain on the show.  Follow her on twitter @sarahsimmusic.

Adam will be going to the Live Shows with an all-girl squad.

Garrett Gardner and Tawnya Reynolds were paired together for their Knockout Round.  Garret performed “Too Close” by Alex Clare.  He wanted to change up his style in this round of the competition and even played the guitar.  Sticking to her country roots, Tawnya performed “Hell on Heels” by Pistol Annies.  Tawnya added her own twist to the song and ended it in her own way by adding a bit of a yodel.  Garrett will remain on Team Shakira.  Follow him on twitter @garrettgardner2.

Kris Thomas was paired with Mary Miranda.  Kris performed “What a Wonderful World” by Louis Armstrong.  He selected this song because of its beauty and message.  Mary Miranda performed “Every Breath You Take” by The Police.  This was the first song she performed in English on the show.  Shakira selected Kris to remain on the show.  Follow him on twitter @kristhomasmusik.

Karina Iglesias and Monique Abbadie were paired together because they are powerhouse Latinas.  Karina performed “Are You Gonna Go My Way” by Lenny Kravitz.  She chose this song because she is a rocker at heart.  Monique performed “The Power of Love” by Celine Dion.  She selected this song because she wanted to show a different side of herself.  Karina remains on Team Shakira.  Follow her on twitter @karinaiglesias_.

Sasha Allen and Shawna P. were the final performers of the night.  Sasha performed “At Last” by Etta James.  She selected this song because it is a powerful ballad.  Shawna performed “Maybe I’m Amazed” by Paul McCartney.  She wanted to show a softer side to her music.  In the end, Sasha will remain for the Live Shows.  Follow her on twitter @sashaallenmusic.