Ok, before we get anywhere, let’s go ahead and squash some madness.  Just in case you missed the elimination show last Tuesday night, two contestants, Judith Hill and Sarah Simmons, from Team Adam were eliminated last week on The Voice.  Essentially, this left coach 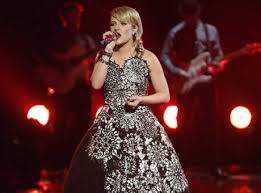 Adam, along with coach Shakira and coach Usher with one contestant each.  Coach Blake is the only coach left with all 3 of his contestants.  What madness was I talking about?  Well at the end of the elimination show, Coach Adam made a statement, mic still on, close to “I hate America”.  Now, he was just upset about how American voted.  I think we all understand that.  However, if we learned anything from last week, it is the power of the vote to keep your favorite people on the show!  Have I covered everything from last week?  I think so.  Monday night the top 6 performed.  In the two hour show, each contestant performed two songs for America’s vote.  However, here’s the great twist – during Tuesday’s elimination show, only one person will be eliminated.

Without further ado, here is your recap of The Voice from Monday, June 3, 2013!

Amber Carrington (@ambercarrington) performed “I Remember You” by Skid Row.  Although the song was originally recorded before she was born, she was able to turn the rock song into something of her own.  Giving it a country feel, she commanded the stage and felt absolutely comfortable with the song chosen by her coach.  She also performed “Crazy” by Patsy Cline.  Being a country artist at heart, she wanted to do the song because she felt it really showcased her country voice ability.

Michelle Chamuel (@michellechamuel) performed “Somewhere Only We Know” by Keane.  Her coach very much believes in her ability to connect to songs and he is continuing to try to select songs that show a softer side of her.  Her performance received great reviews from the coaches.  She also performed “I Knew You Were Trouble” by Taylor Swift.  She wanted to try a song with a pop feel.  During her rehearsals, Swift stopped by to give some tips.  Chamuel fought to perform the song and she definitely proved herself on the stage.

Sasha Allen (@sashaallenmusic) performed “Ain’t No Way” by Aretha Franklin.  This song means a lot to her because she grew up around soul music and it is also her mom’s favorite song.  Each week, we have come to expect greatness from her and a powerful note and she did not disappoint.  With the final performance of the night, Allen left it all on the stage with “Before He Cheats” by Carrie Underwood.  Although a country – pop song, she was able to add some sass to the song and deliver one of the best performances of the night!

Danielle Bradbery (@dbradbery) performed “Shake the Sugar Tree” by Pam Tillis.  Although she gave a great performance, it wasn’t her strongest of the season.  She also performed “A Little Bit Stronger” by Sara Evans.  This song was her song choice because of something someone in her family went through.  Although she seemed to struggle during rehearsals, there was no evidence of that when she hit the stage.

Holly Tucker (@hollytmusic) performed “When God Fearin’ Women Get the Blues” by Martina McBride.  She was ready to show off some more attitude and this song gave her the ability to do so.  Although she gave a great performance, it was noted that more was expected from her because of what they were used to seeing.   She also performed “My Wish” by Rascal Flatts.  During her performance, you could see her connect with the lyrics and she gave a stellar ending.

The Swon Brothers (@theswonbrothers) performed “Wagon Wheel” by Darius Rucker.  Although this is a more current song, they were more than willing to tackle it.  Consistently, Zach and Colton have managed to stick to their country roots while maintaining their own style.  Tonight, that was no different.  For their song, they performed “Okie From Muskogee” by Merle Haggard.  With all the love going to Oklahoma right now and it being the home state of Zach and Colton and himself, Blake was more than happy to have The Swon Brothers perform the song.