This week is crucial for the contestants and the coaches of The Voice.  Tomorrow, two people will be eliminated and not be around for The Voice finale happening next week!  Therefore, the stakes are high because each coach runs the risk of not having a singer in the 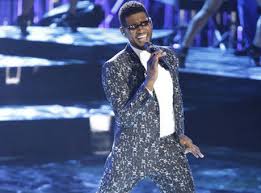 finale.  Usher started off the show by performing “Twisted”.  Each contestant performed two songs this week, one of them being selected by their coach.  Holly was eliminated from Team Blake last week, which was the first contestant he had lost during the live shows.

Now that you are caught up with how the elimination is going to go this week, here is your recap from Monday, June 10, 2013 of The Voice!

Amber Carrington (@ambercarrington) performed “Firework” by Katy Perry.  The song is dedicated to her best friends in her hometown because they helped get her through some tough times in her life.  Although not her best performance, she was still able to make the song her own with the new arrangement.   Her second performance of the night was “Sad” by Maroon 5.  The arrangement of the song was absolutely amazing and allowed Amber to show herself during the performance.

Michelle Chamuel (@michellechamuel) performed “Clarity” by Zedd ft. Foxes.  As we’ve come to expect from her, she delivered the song perfectly and added her own twist.  For her dedication song, she performed “Time After Time” by Cyndi Lauper.  She dedicated the song to her coach, Usher, because of all he has done for her on the show.  She closed the show in the only way she knew how, with an epic performance!

Sasha Allen (@sashaallenmusic) performed “I Will Always Love You” by the late Whitney Houston.  She is dedicating the song to her children because she feels the song is about unconditional love.  Although a little nervous at first, she pulled it together to give a flawless performance.   For her second selection of the night, she performed “Bad Girls” by Donna Summer.  She seemed so comfortable during her performance and like she was truly enjoying herself.

Danielle Bradbery (@dbradbery) performed “Please Remember Me” by Tim McGraw.  Tonight, there was a maturity during her performance that had been missing.  However, she was fully prepared for such a big song and she made it look as if it was an effortless performance.  She dedicated “Who I Am” by Jessica Andrews to her friends and family because of the love she has for them.  She delivered another great performance.  In fact, that was probably her best performance of the season.

The Swon Brothers (@theswonbrothers) performed “Turn the Page” by Bob Seger.  This song was dedicated to their former and current band members and others that are playing with them currently.  You could hear the passion in their voice during the performance.  They also performed “Danny’s Song” by Kenny Loggins.  It was a stripped down performance, but those have proven to be their best performances.  This one was no different.