This week is the final week of The Voice! Only Team Usher and Team Blake remain.  In a shocking elimination, Amber Carrington and Sasha Allen went home last week.  With the final three and two of them being part of Team Blake, the odds of Coach Blake having a three 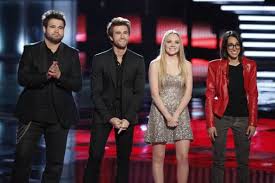 peat is a great possibility.  However, it is up to you America to vote for your favorite artist to make sure they win Season 4 of The Voice!  Each artist performed three songs in total – a song with their coach, a song previously performed this season, and a new song for the votes.

If you missed any single moment from The Voice the night of June 17, 2013 (which I hope you didn’t), don’t worry, your recap is ready for you!

Michelle Chamuel (@michellechamuel) performed “Why” by Annie Lennox.  With one of her best performances of the season, Chamuel did not disappoint the audience.  From staging, wardrobe, and song choice, this was the perfect blend of it all.

Danielle Bradbery (@dbradbery) performed “Born to Fly” by Sara Evans.  She hasn’t performed this fast of a song the entire season and tonight, her coach wanted her to try something new.  The song also showed more of her range.  Although her connection with the audience wasn’t as evident as it was in past performances, she was still able to deliver a solid performance.

The Swon Brothers (@theswonbrothers) are the first duo to make it to the final of The Voice.  The brothers performed “I Can’t Tell You Why” by Eagles.  As usual, they connected with the song, even though it was not a country song.  However, it was odd to hear the falsetto coming from them, but it was a welcomed change.