We have reached the final night of the blind auditions of The Voice.  That was a fast three weeks!  Going into Tuesday night’s episode, Adam, Shakira, Usher, and Blake each had only one space left on their team.

Who made the cut?  Well, keep reading to catch up on The 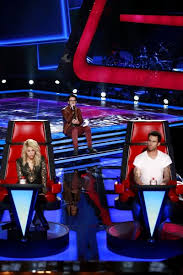 Jacqui Sandell has been singing since she was 9.  She is a classically trained dancer.  However, after slowing down from dancing, she joined a band and started to focus more on her music.  Although in a comfort zone with the band, she is finally ready to make an attempt at a solo career.  She performed “Dreams” by Fleetwood Mac.  She won the attention of Usher and Blake.  However, she chose to be part of Team Blake.  Follow her on twitter @jacquimyar.

Amber Carrington came to the blind auditions with her grandparents.  Her mom passed away from cancer after fighting it for 5 years. After her death, Carrington stopped singing, but one day, she found the strength to start singing again.  She performed “Good Girl” by Carrie Underwood during her blind audition.  Although not able to fight for a spot to be on Blake’s team, where the majority of the country artists are, she did get Adam to turn his chair.  Since he is the only one that turned around for her, she will be part of Team Adam this season.    Follow her on twitter @ambercarrington.

Luke Edgemon got his start singing in the church.  After high school, he left North Carolina to move to LA to become a background singer.  Although he enjoys what he does, he is ready to step into the spotlight and do his own music.  He performed “I Can’t Make You Love Me” by Bonnie Raitt.  He managed to get both Shakira and Usher to turn their chairs.  In the end, he decided to have Shakira be his coach.  Follow Luke on twitter @lukeedgemon.

Jessica Childress has been singing for a long time.  Although a college graduate with a great career, she felt like she needed to do music.  She feels that music is what she was born to do.  She performed “Marry You” by Bruno Mars.  Getting selected for the final spot on the show, she will be part of Team Usher.  Follow her on twitter @thejchildress.