The Voice has entered the Battle Round phase of the competition.  Just in case this is your first season enjoying this amazing show, let me give you a little information of how this part of the show works.  In this round, the team of 12 will be competing against each other. 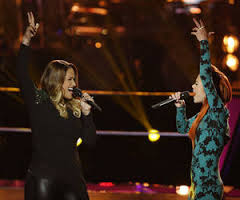 At the discretion of the coach, they will choose which two people or duo will battle each other.  The coach will also select the song.  After getting the chance to rehearse, the singers will actually do “battle” in a boxing ring and sing their parts of the song.  At the end of the battle, the coach will decide who won the round.  The singer not selected to continue will leave the show.  However, the other three coaches have the chance to “steal” the losing singer from their former coach and add them to their team.

Each coach is granted two steals during the entire Battle Round so each coach will be listening carefully and making decisions based on who they think they can coach to win The Voice.

If more than one coach decides to steal, the artist must choose who they would like to be their new coach.  An added treat to this round is that the coaches bring in other artist to help coach their team.  Hillary Scott from Lady Antebellum is working with Team Adam.  Sheryl Crow is working with Team Blake.  Joel Madden from Good Charlotte is working with Team Shakira.  Madden is also a coach on The Voice Australia.  Lastly, Pharrell Williams is working with Team Usher.  Now that we have that clear, let me give you the recap of tonight’s Battle Round of The Voice!

Sasha Allen and Amber Carrington performed “Try” by Pink.  He picked the song because of the emotion behind the song and the darkness.   Using her softer country voice, Amber Carrington kept with the emotion and softness of the song.  However, using her more powerful voice, Sasha Allen was able to take the song and take it to levels that we do not hear on the radio.  Although a hard decision, Adam selected Amber to remain on his team.  Follow her on twitter @ambercarrington.   Usher and Shakira immediately elected to steal Sasha so that she does not go home, just yet.  Sasha is now part of Team Shakira.  Follow her on twitter @sashaallenmusic.

Judith Hill and Karina Iglesias were paired together to perform “It’s a Man’s Man’s Man’s World” by James Brown.  Adam paired these two together and selected this song because of the power house potential.  While Judith spent rehearsal trying to find something to hold on to in the lyrics, Karina was able to run with it immediately.  However, during the Battle Round, both women were able to give the best performance of the night!  Adam selected Judith Hill to remain on his team.  Follow her on twitter @judith_hill.  However, Karina will be remaining on the show because she is now part of Team Shakira.  Follow her on twitter @karinaiglesias_.

Garrett Gardner and J’Sun performed “How You Like Me Now” by The Heavy.  Although Garrett has a natural rasp to his voice, he has to be mindful to not overdo it while performing the song.  J’Sun comes from an R&B background and has the opportunity to change the song to fit his style.  After the performance, Shakira selected Garrett Gardner to remain this season.  Follow him on twitter @garrettgardner2.

Holly Tucker and Michelle Raitzin performed “Blown Away” by Carrie Underwood.  Due to them both having such a large range in their voices, Blake decided they would give an awesome performance.  Although Holly usually has a softer tone, she was advised to really get into the meaning of the song.  Michelle has such a high tone that she was advised to watch her pitch, yet maintain her power.  Blake selected Holly Tucker to continue on his team.  Follow her on twitter @hollytmusic.

Christian Porter and The Swon Brothers were paired together to perform “Won’t Back Down” by Tom Petty.  Christian is challenged because he is competing against the two brothers who are very much comfortable singing music by Tom Petty.  Blake felt this was the best song to showcase the voices of everyone involved in this battle, but he also felt The Swon Brothers needed to tighten up their performance during rehearsal.  Blake selected The Swon Brothers to remain on his team.  Follow the duo on twitter @theswonbrothers.

Jess Kellner and Taylor Beckham performed “You Know I’m No Good” by Amy Winehouse.  Usher figured that both young performers would like the song so it was an easy song choice for him.  Also his coaching style is rather interesting.  Although Jess has a warm tone, he wants her to bring the power.  He wanted Taylor to bring the attitude to the song.  He selected Jess Kellner to remain on his team.  Follow her on twitter @jessicakellner3.  Blake added Taylor to his team with a steal.  Follow her on twitter @taybeckham.