We have reached the final night of the Battle Rounds for The Voice. As the coaches, of The Voice and their mentors wind down their training with their team and with only one steal available by Usher, the contestants have reached a point of no return.  Desperately 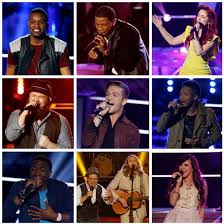 singing for their spots on the show, the remaining artists did not disappoint.

Duncan Kamakana and Sarah Simmons performed “Wanted You More” by Lady Antebellum.  They were paired together because of their power, their different styles, and the fact this is a great song that gives them to opportunity to truly harmonize the way the original artist did.  Adam selected Sarah to remain on the show.  Follow her on twitter @sarahsimmusic.

Agina Alvarez and Amy Whitcomb performed “Heartbreaker”.  Ultimately, Adam kept Amy on his team.  Follow her on twitter @amylynnwhitcomb.  Her performance was not aired in its entirety.

Brandon Roush and Shawna P. performed “Piece of my Heart” by Janis Joplin.  They were placed together because they are both very distinctive and have their own style.  Shakira is looking for the connection with the song by the artists.  Although Shawna found her place in the song early on, Brandon was still searching for his place even up until the final rehearsal.  After a stirring performance, Shakira decided to keep Shawna on her team.  Follow her on twitter @shawnapsings.

Cathia and Mary Miranda performed “Antes de las Seis” by Shakira.  She selected them to battle because they are both Latina artist and she wanted them to perform in Spanish.  Although Cathia was able to quickly make the song her own, Mary Miranda had to take the time to learn the song and her part.  In the end, Shakira decided to keep Mary.  Follow her on twitter @marymiranda95.  However, Usher used his final steal to add Cathia to his team.  Follow her on twitter @cathiasings.

Justin Rivers and The Morgan Twins were the final battle for Team Blake.  As a shock to himself, Blake decided to keep Justin on his team.  Follow him on twitter @justinrivers.  His performance was not aired in its entirety on Tuesday’s show.

Chelsea M. and Michelle Chamuel performed “Titanium” by David Guetta and Sia.  Michelle will continue on Team Usher.  Follow her on twitter @michellechamuel.  Her performance was not aired in its entirety on the show.