The Voice has entered the Battle Round phase of the competition.  Just in case this is your first season enjoying this amazing show, let me give you a little information of how this part of the show works.  In this round, the team of 12 will be competing against each other.  At the discretion of the coach, they will choose which two people or duo will battle each other.  The coach will also select the song. 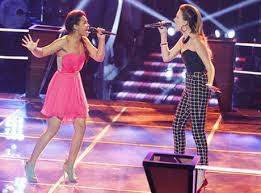 After getting the chance to rehearse, the singers will actually do “battle” in a boxing ring and sing their parts of the song.  At the end of the battle, the coach will decide who won the round.  The singer not selected to continue will leave the show.  However, the other three coaches have the chance to “steal” the losing singer from their former coach and add them to their team.  Each coach is granted two steals during the entire Battle Round so each coach will be listening carefully and making decisions based on who they think they can coach to win The Voice.  If more than one coach decides to steal, the artist must choose who they would like to be their new coach.  An added treat to this round is that the coaches bring in other artist to help coach their team.  Hillary Scott from Lady Antebellum is working with Team Adam.  Sheryl Crow is working with Team Blake.  Joel Madden from Good Charlotte is working with Team Shakira.  Madden is also a coach on The Voice Australia.  Lastly, Pharrell Williams is working with Team Usher.

Now that we have that clear, let me give you the recap of The Voice Battle Round from Tuesday night!

Warren Stone and Michael Austin, both country singers, performed “My Kinda Party” by Jason Aldean.  To ensure a country artist remains on his team, Adam paired these two for the first battle of the night.    Michael is recovering from surgery and learning how to hit his notes again, while Warren is focusing on not losing himself in the song.  Adam decided to keep Warren on his team.  Follow him on twitter @wsmusicsc.

Mark Andrew and Tawnya Reynolds performed together.  Their performance was not aired, but Shakira decided to keep Tawnya on her team.  Follow her on twitter @tawnyareynolds1.

Grace Askew and Trevor Davis performed together.  Although the performance was not aired, Blake selected Grace to continue on the show.  Follow her on twitter @graceaskew.

Jeff Lewis and Josiah Hawley were paired together to perform “Roxanne” by The Police.  He wanted them to sing together because they both show a certain confidence in their performances.  Usher tried a different technique with them during rehearsals and had them battle over one microphone.  During the performance, you can tell they both had been well-trained when it came to hitting the stage.  Usher elected to keep Josiah on his team.  Follow him on twitter @josiahhawley.

Jamila Thompson and Audrey Karrasch performed “If I Were a Boy” by Beyonce.  Although the performance was not aired, Usher selected Audrey to remain on the show.  Follow her on twitter @audreykarrasch.