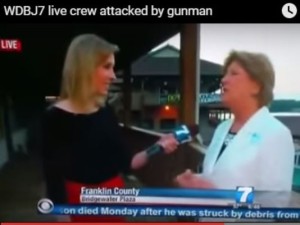 the shooter is and are pursuing him.

The station said the shooting took place at about 6:45 a.m., at Smith Mountain Lake, a resort about 35 miles from Roanoke Virginia. Killed were WDBJ7’s cameraman Adam Ward, 27, and reporter Alison Parker, 24.

The live broadcast at the time of the shooting showed Parker interviewing someone at a resort when, just off camera, shots rang out and Parker is heard screaming. The recording appears to include a  glimpse of the gunman dressed in black.

Authorities were “working very diligently to track down the motive and the person responsible for this terrible crime against two fine journalists,” Marks said. “They were just out doing their job today.”

Marks said it appeared that Ward was shot first, and that Parker was shot trying to flee. Marks said authorities told him they were pursuing a possible suspect.

Marks said Ward was engaged to his producer, who was working at the station at the time of the shooting and saw the events unfold live.