After 5 years, Tom Cruise and Katie Holmes are now getting a divorce according to


“This is a personal and private matter for Katie and her family,” Holmes’s attorney Jonathan Wolfe said Friday. “Katie’s primary concern 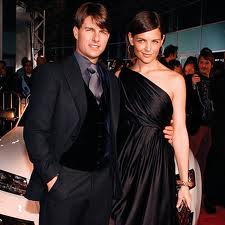 remains, as it always has been, her daughter’s best interest.”

Cruise, 49, wed the 33-year-old Holmes in 2006 in an Italian castle after publicly declaring his love on “The Oprah Winfrey Show,” emphatically jumping on her couch.

The couple has a 6-year-old daughter, Suri, who has herself become a staple of the tabloids and celebrity magazines.

Their plan to divorce was first reported by People magazine.

“Kate has filed for divorce and Tom is deeply saddened and is concentrating on his three children,” Cruise’s representative, Amanda Lundberg, told The Associated Press. “Please allow them their privacy to work this out.”

Cruise and Holmes had a whirlwind romance — the “Dawson’s Creek” actress confessed she had a childhood crush on the “Top Gun” star — and were engaged at the Eiffel Tower. An elaborate wedding followed before a Church of Scientology minister.

“I can’t be cool. I can’t be laid-back,” a starry-eyed Cruise said on “The Oprah Winfrey Show.” ”Something happened and I want to celebrate it.”

But the couple’s romance was instant fodder for the tabloids, who chattered about everything from the couple’s fights and Suri’s clothing to Holmes’ conversion to Scientology.

Cruise, currently starring in “Rock of Ages,” was previously married to Mimi Rogers and Nicole Kidman, with whom he has two children.