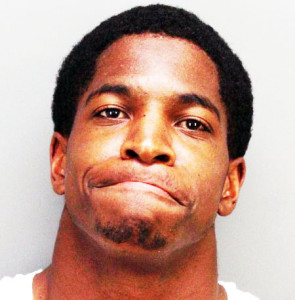 L.A County jail. TITUS YOUNG was charged with assaulting a police officer, resisting arrest and burglary. A few days earlier TITUS YOUNG was arrested for driving under the influence, then arrested again the same day for reportedly trying to take his car out of tow. Since then TITUS YOUNG has bonded out and receiving treatment at the Crosby Center in S.D., where specialist believe his actions come form to many hits in football.

TITUS YOUNG’S father, RICHARD, says his son suffers from a mental health disorder and desperately needs help. “His mind is not capable enough to go out and handle society because of his situation,” says RICHARD. RICHARD told the press last year his son was prescribed the antidepressant Seroquel, which is used to treat bipolar disorders and schizophrenia.

Some of TITUS YOUNG’S fellow NFL receivers have expressed concern over the time period. “A guy like TITUS, I hear people say his career is over. Well first all this is not about his career, its about his life,” Chicago Bears receiver BRANDON MARSHALL said in an interview with ESPN’S “NFL LIVE.”

According to TMZ SPORTS, PETE DANIEL’S, intake coordinator of the Center, told them TITUS YOUNG was admitted to the facility last weekend and has been working with a team of specialist nonstop. DANIEL’S claims TITUS YOUNG’S symptoms include hyper vigilance, mood swings, emotional instability and more. It was reported by DANIEL’S that TITUS YOUNG is responding positively to all treatment and sees a change in MR. YOUNG. DANIEL’S states without a doubt his mental health disorder comes from too many blows to the head. TITUS YOUNG is feeling better and is more control of his life. In 21 days DANIEL’S claims to have a better diagnosis and plan on how to address his treatment.

TITUS YOUNG has had full on support by all family and close friends. A family member stays with MR. YOUNG at the center. TITUS is hoping the courts will let him continue treatment instead of putting him back behind bars.

Prayers go out to TITUS YOUNG and his family. We truly wish MR. YOUNG all the best.