Tim Wolfe Mizzou President is under fire and scrutiny of his handling of racial incidents on the campus of the University of Missouri also know as Mizzou. 30 of the players in the school’s football coach have joined together 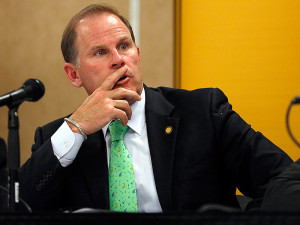 and are refusing to play or practice until Tom Wolfe steps down and resigns from his post as president of the University.

The players are actually going on strike and are all unified in standing together on this issue. Students are also getting involved and spending the night in tents and the movement is gaining national attention and support. Faculty members are also joining in on the protests and sources say that walkouts are expected in all are arguing that they will not give up until the University President Tom Wolfe is gone.

The protests were all spurred because of the way that Tim Wolfe handled a series of racially charged incidents and complaints. Some of these reports included black students being called the N-Word and a swastika drawn on a dorm wall. Tim Wolfe went on the record to state “racism is unacceptable” but the students feel as though he does not care about racism.

The University of Missouri football players announce Saturday that “they will no longer participate in any football related activities and they are supporting one student who is on a hunger strike until president Tom Wolfe resigns. On Sunday Coach Gary Pingel tweeted a photo “the MIZZOU Family stands as one we are united. We are behind our players #ConcernedStudent1950 GP”

Tom Wolfe received extra criticism after a homecoming in which protesters were out in full force when he took his car and push his way through the demonstrators. Tom Wolfe addressed a few of the supporters and stated that “my actions will support my words” an unknown demonstrator replied by saying “you didn’t show actions when we were in front of your car” President Tom Wolfe later apologize for that incident, but later told news sources that he will not resign. Tom Wolfe stated “I am asking us to move forward in addressing the racism that exists at our university” “together we must rise to the challenge of combating racism, injustice and intolerance.”

The University Board of Curators has been called to an emergency executive session and has alerted all students to keep an eye on the emails to learn the results of that meeting. Sources are saying that Tom Wolfe has agreed to resign.