Vyzion is proud to announce its alliance with Temper Music Group. Vyzion got its humble beginnings as a small record label. Vyzion has since 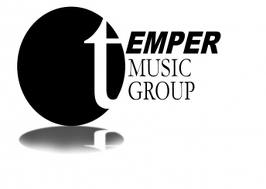 changed its strategic direction to become a premium multimedia marketing company that specializes in multimedia videoproduction, internet marketing and radio advertisement for small to medium size businesses. Vyzion also provides the same type of services for artist that want premium web and social media exposure, BDS and Media Base services.

Vyzion has captivated the world with its Internet Radio Station that now has a presence in 94 countries and over 2200 cities worldwide. This fast expansion has pushed Vyzion to seek the help of Temper Music Group that has the same growth projections as Vyzion.

Temper Music Group is a Premiere Indie Label that has the potential of being the next major record label.

Temper Music Group is a global recorded music company with a roster that includes a broad array of artists and international superstars. The company boasts a vast catalog of recorded music. Temper Music Group is a subsidiary of the Temper Group and parent companies Down To Earth and Creative Sustainable Solutions, which is home to a premier record label representing music from every genre. Temper Group is a wholly owned Corporation with divisions in music as well as film and television. TMG recording artists are developed and produced in house by the Promiscuous Music/East Wing writing and production team consisting of Multi Platinum, Grammy, Billboard and ASCAP Award winners Calvin Gaines and Michael Moog. Promiscuous Music also serves as A&R for the label bringing talent that is undeniable and unmeasured. TMG strives to provide future artistic contributions to both the entertainment industry as well as to the culture of music while facilitating its preservation.

TMG provides an extension of classic and real music representation with the same quality and long life presence to the entertainment industry.

“True music expression can come in all forms of delivery. Through the integration of diverse genres, as long as there is a vehicle to maintain excellence through the provision of recording, manufacturing, and distribution. We have found this to present tremendous results with all of our transcended forms of committed artists. They all demonstrate foundational properties of talent as they integrate it into the generational musical expressions of today. We at Temper Music Group, (TMG) pride ourselves on continuing to support the nurturing and development of our future generations of music culture. We also take great pride in embracing and supporting the arts through dedicating ourselves to bridging the talents of our artists with expanded forms of arts educational forums which promote continuous growth for music, as well as for other forms of artistic expression.”

The collaboration of these to great companies is sure to change the music industry by providing a no nonsense approach of audio production, distribution and internet marketing. These two companies are sure to be huge successes and will be around for years to come.