is an up and coming pop sensation from Philadelphia Pa. The  beautiful  18 year old  sits down today with Vyzion Entertainment to talk about her music, performing, her influences, and her future in the music business. 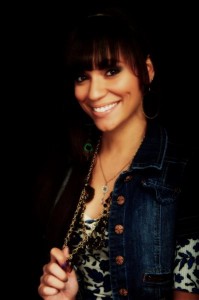 Vyzion Ent:  How are you doing today?

Vyzion Ent:  Why is music so important to you?

Tatiana Barbosa:  That’s how I express myself.  I cannot go a day without singing or listening to music.  It’s a part of who I am and it’s what I love to do.  One of my favorite sayings is music is life.

When asked to elaborate on “music is life”, TB responded by saying, “Music is my life and it’s what I live to do. I don’t want to do anything else.”

Vyzion Ent:  When did you first start singing and performing?

Tatiana Barbosa:  When I was about 8, me and my sister would put on shows for my dad every weekend.  My first real performance on stage was my high school talent show.  I sung Rhianna’s Take A Bow.  That’s when I really fell in love with music and performing and realized that is what I wanted to do for the rest of my life.

Vyzion Ent:  What has been your most non-musical influence and why?

Tatiana Barbosa:  My daddy.  Because he’s a hard worker, he’s always there for me, and he’s a strong believer in what I do.  I love my daddy.

Vyzion Ent:  What was your childhood like while you were growing up in the Philly area?

Tatiana Barbosa:  It had it’s up and downs, but I’m not complaining.  It made me the person that I am today.

When asked to elaborate, she replied simply with “Family struggles.”

Vyzion Ent:  On your website, it says you sound like Rhianna, Beyonce, Ciara, Keyshia Cole, and Michael Jackson.  What quality did you take from each of them to make your sound unique?

Tatiana Barbosa:  First off, it’s an honor that people compare me to those artists because they are very talented.  I learn a little bit from a lot of artists and not just them.  For instance, the way Beyonce sings, she puts a lot of spirit and sass in her songs.  When it comes to Michael Jackson, his songs are timeless.  You can listen to them and they still sound like they could be played today.  That’s what I want to do with my music; have it to be timeless.  I want people to listen from it 10 years from now and people still listen to my music and it still sounds like it belongs out there.

Vyzion Ent:  Where do you see yourself in 5 years?

Tatiana Barbosa:  Well, I hoped to be signed.  Still writing for myself as well as other artists.  I want to get into acting, modeling, start my own clothing line and jewelry line.  I want to do it all.

When asked to elaborate about the jewelry line, she responded, “Since I was little, I was always making jewelry.  As I got older, I got better and would sell jewelry to my friends in school.  I used to watch the Fabulous Lane with Kimora Lee Simmons.  I would Bedazzle my clothes and my friends clothes as well.”

Vyzion Ent:  What or who influenced you to pursue a musical career?

Tatiana Barbosa:  Growing up, music has always been a part of my life.  I get my music genes from my dad because he used to be in a group.  No one really influenced anything.  It kind of just happened.  Music has been something that I wanted to do since I was little.

Vyzion Ent:  Of all the things that you do as a musician, what is your favorite thing to do?

Tatiana Barbosa:  That’s a hard question because I love it all.  Performing is number 1 because I love seeing the reaction of the people.  I love recording in the studio too.  I love being in there from 8 at night until 5 in the morning.  I may be tired, but I would rather be up doing what I love, rather than sleeping.

Vyzion Ent:  If you weren’t in the music industry, what would you be doing in the future?

Tatiana Barbosa:  I would probably be acting and doing my clothing line.  It’s hard because music is what I love to do.  Even if I couldn’t sing, I would be in the music industry somehow.  I would be writing for people or an engineer because I know how to make beats.

Vyzion Ent:  Being a young artist at 18, what advice can you give to artists trying to break into this industry?

Tatiana Barbosa:  Stay focused.  Don’t let anyone tell you that you can’t do anything.  It’s a lot of sacrifices.  Have fun and love what you do.  It can be hard.  If you don’t love what you do, it’s not going to be worth it.

Vyzion Ent:  What was your inspiration behind Slow Down?

Tatiana Barbosa:  Basically, people want to rush into relationships and me, I want to focus on my career before anything else.  It’s telling people you don’t have to rush into anything, just take it slow and get to know someone first.

Vyzion Ent:  How was it performing the National Anthem this morning?

Tatiana Barbosa:  Very difficult song to sing, but I learned it through choir.  I sung it with my sister’s group called S.A.1 (Stand As One) and we had really good harmony and it was a lot of fun. I was never a part of the group, but they help me out alot.

Vyzion Ent:  What last thought would you like to leave with your fans about where your career is headed?

Tatiana Barbosa:  I have a lot of labels looking at me at the moment and lots of original songs that will be coming out soon and plenty of performances during the summer time.  It’s just the beginning.  We have a lot coming up.  Watch out!