Hiphop Team Swagg City Boston is a music group based out of Maynard, Massachusetts. SC is short for “Swagg City” which is used mainly on Facebook, Twitter, and YouTube. SC was started by Anthony Dugas and Jacyn Norfleet as two kids with dreams to become 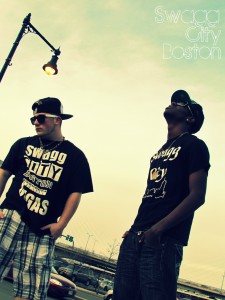 artists and turn it into a career. In September of 2011, Dugas posted a Facebook message to Jay for a spot to make SC. Ever since then they started recording. Shortly after talking they got a hold of “DJ Doubletake” who worked with them for a few sessions then the distance became a hassle so they switched to a producer based out of Maynard, TNOVA. TNOVA worked with them for about 3 months and produced 5-8 songs with them then broke ways to build their own studio which they are currently using to this day. SC has been building a fan base mainly through Facebook Pages. They started in October 2011. As of 2/28/2012 they have built it to 1,187 fans. Swagg City released their first mixtape called “The Alumni” which had over 1,600 views in the first day. The Mixtape contained 13 songs mixed from different producers. Dugas and Jay have expanded from just music as they film “SCTV” which stands for Swagg City TV. They do skits all over Massachusetts. They also now produce local artists to expand the voice of other artists in the Maynard, Massachusetts area. Rebecca Marotta, Who is the Manager of Swagg City also films all the shows, Music Videos, and Photoshoots.

Swagg City Boston has done a number of shows and also they are most known for “giving back” to Michael Murphy, A kid who had a dream of becoming a rapper and loving The Boston Bruins. That dream was cut short after an accident that gave him serious brain damage. Swagg City Boston and Boston Bruins player Tyler Seguin teamed up and visited his house to support him and do anything they can to raise money. After that Rebecca Marotta, Who is now Dugas’s fiance and currently the Swagg City Boston Manager joined the team. Rebecca has reached out to many names including Moufy, Sammy Adams and more since starting. Rebecca has also gotten Swagg City on Vyzion Radio, Which is top 40 biggest online radios.

Dugas is currently living in Maynard, MA where the studio is and Jay is currently in Dorchester. The family has been growing since with over 1,200 Facebook followers, 2,000 Twitter Followers and 2,000 on YouTube.