Straight out of Compton is an upcoming biographical drama based on one of the most notorious rap groups in history.

The West Coasts’ own NWA the group consist of Eazy E, Dr. Dre, Mc Ren, Ice Cube and DJ Yella. The title of the film 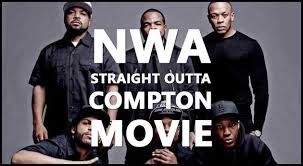 “Straight out of Compton” comes from the groups debut 1988 studio release “Straight Out Of Compton”.

Lets talk about the group itself for a second. Compton California 1986 for me being on the east coast this group opened the window and let us take a peak into a lifestyle, a place, a situation that was left unspoken. The brutal honest truth about what was going on in the ghettos of California in the mid to late 80’s. NWA is considered one of the most abrasive acts in gangster rap and on the other side of the coin is credited for being one of the most important acts in the history of rap music.

The group has over the top explicit lyrics, the were viewed as disrespectful to women and seemed to glorify drugs and crime. The group was banned from mostly every American radio station and still has managed to sell over 10 million units right here in the U.S. of A! One of the biggest battles that N.W.A. fought was with the police system. One of the biggest songs off of the “Straight out of Compton” album was “F’ the Police”. That shocked America by bluntly protesting about police brutality and racial profiling. The FBI sent a letter to Ruthless Records and its distributor Priority Records basically saying that (I am paraphrasing) “We don’t take to kindly to you advocating violence and the law enforcement community takes exception to that” the letter that was sent to the companies is on display in the Rock and Roll Hall of Fame in Cleveland, Ohio.

The group was formed by Mr. Eric Eazy E Wright. He was also the Co-Founder of Ruthless Records with Mr. Jerry Heller. Eazy met Dre. Dre. Dre then brought in Dj Yella who were both members of “The World Class Wrecking Crew” at the time as Dj and Producer. They had a single called “Before you turn off the Lights” slow song ( R&B go figure..). They also bought in another producer from “The World Class Wrecking Crew” by the name of Arabian Prince. Ice cube came from a group called “C.I.A” who released a single on Macola Records in 1987 called “Panic Zone”. These four original members recorded “Panic Zone”, “8-Ball” and “Dope Man”. Mc Ren joined the group shortly after in 1988.

Their debut “Straight out of Compton”,  then follow up with “Eazy Does It”. Ice cube left the group in 1989 over disputes regarding royalties because he felt he was not getting his fair share. He wrote mostly half of the lyrics on “Straight out of Compton” and felt… that it was not adding up. Left and began his solo career shortly after. The group went on recording together “100 Miles and Running”, then “Niggaz for Life” was their final album. That’s when the internal beefs started about contracts and publishing. They split up. Diss records were flying everywhere and everyone started to build their solo careers from that point.

The movie “Straight out of Compton” tells the story in detail of the rise and fall of the group N.W.A.. The movie is directed by Mr. F. Gary Gray. who also worked with ICE Cube on “Friday” and he worked with doctor Dre on “Set it Off”.

“Straight out of Compton” in theaters August 14th 2015 #CapKallDay #TheRecap

*The ReCAP* with Dj Capitol K:

Listen here to the Interview