If it ain’t broke, don’t fix it, unless, of course, you’re George Lucas. When George Lucas announced in August 2010 that all six Star Wars movies 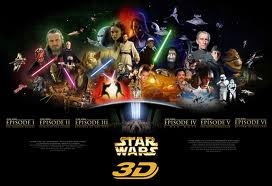 will be released in a box Blu-ray set in 2011, I’m sure hard core fans were excited. He promised never before released deleted scenes, one of whichbeing an alternate beginning to Return of the Jedi. The Blu-ray box set entitled Star Wars: The Complete Saga, will be released on September 12, 2011 internationally and on September 16, 2011 in North America. However, the deleted scenes aren’t all the fans are getting. With this new release, the fans are also getting some changes to the original works. Hmmm.

Star Wars, as it was first titled, was originally released in theaters on May 25, 1977. This movie would become a pop culture phenomenon taking the world by storm. I previously reported in a July article here in Spin Live Weekly about how a young Mark Hamill stood alone and unobserved at a single table at Comic Con surrounded by posters of an unknown movie. If Comic Con goers knew how the following year this movie would blow up they probably would have been crowding him for an autograph. I’m sure they are kicking themselves now because that’s how the die hard Star Wars fans are. The question is if you have the loyal fans from the first time around why change anything that brought them in? This is not the first time George Lucas made changes to the collection. In 1997, Star Wars, The Empire Strikes Back and Return of the Jedi were all released as a box set for the 20th anniversary of the original movie.

In the case of A New Hope, the audio is altered when Obi-Wan rescues Luke from the Sand People and from Return of the Jedi the audio was added when Darth Vador turns against his master in order to save Luke. The changes will never stop because no matter how many changes you make towards the original the die hard fans will be there to purchase the new edition of the legacy. However, Lucas does run the chance of losing some of his fan base with so many variations of the original that the original losses its uniqueness. In 2017 we will be coming on the 40 year anniversary of the release of Star Wars and I expect another box set as well with even more changes. When will these changes stop and we get a definitive and complete story? Only George Lucas knows that.