Yes!! Vyzion is has found a home in Lake Norman NC! Vyzion and DJ Steven K will be hosting every Wednesday at The Dirty Martini!  The night will start with some mingling with Vyzion’s 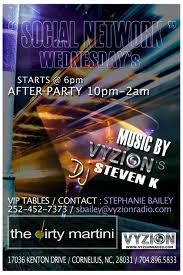 Social Networking Wednesday from 6-10 with Vyzion Radio playing over the speakers.  The sexy ambiance of The Dirty Martini will surely get you in the mood to chit chat with some other individuals that have the same interests as yourself.  Maybe even try Vyzion’s signature martini “The V” guaranteed to make you feel smoking hot.  After Vyzion’s Social Networking Wednesday will be the after party with Vyzion Radio’s own DJ Steven K!

DJ Steven K is an eight year veteran in the DJ business and became a DJ the same way most do. In 2003 he started DJing in a spare room in his house then on to house parties, then to his first club gig, then to residencies, now into producing and remixing. He has been call “the best well rounded DJ” in the Q.C. with his wide variety of music and mixing abilities. Anywhere from 70’s Motown to old school hip hop, 80’s, 90’s, top 40, break, house, electro house, rock and metal. He has DJ’D at many major clubs and held residencies in charlotte at Mythos, Ibiza, Twist, Liquid Lounge, City Tavern, Club 2000, Cans, Ménage, Kashmir, The Sunset Club, Kiss Lounge, Luna Lounge, Eden, Lava Lounge, The Zoo, and Velocity. He has also Djed different parties for Michael Jordon, Bob Johnson, Charlotte Bobcats, Carolina Panthers, Fantasia, Huey Louis and members of the NC government.  You can read more about DJ Steven K at vyzionradio.com.  You can also listen to his mixes online at vyzionradio.com or on your free Iphone or Droid app.

Vyzion Radio is very excited about this business venture with Lake Norman’s most sophisticated lounge.  The Dirty Martini is Lake Norman’s premier Ultra Lounge!  It is conveniently located next to the Galloway Hooker in Kenton Place, positioned on the backside of Huntersville’s trendy Birkdale Village.  From 6-2am, sip one of their signature martinis while you take in the hottest nightlife experience the lake and Vyzion has to offer.   The well-dressed professional crowd chills out to great music with Vyzion Radio on Wednesday’s, or get decked out for the after party hosted by Vyzion Radio DJ, DJ Steven K.

The objective for Vyzion Radio is to deliver entertainment that excites and fulfills the thirst for the masses. Vyzion Radio is comprised of a highly talented and confident team that is putting forth an industrious effort endeavoring to provide the entertainment marketplace with something that is unique, invigorating and satisfying. With the amalgamation of multimedia presentations that utilizes audio, pictures, and videos, we have a special niche in the entertainment industry. This effort will influentially make an indelible impact in the world of interactive media.  To learn more about Vyzion Radio, advertising with Vyzion Radio or the Vyzion Elite DJ’s, please visit vyzionradio.com.  You can also listen online or on your free mobile phone app for Droid or IPhone.

This event, like so many that Vyzion has hosted, will be a success.  Come network with elite business owners, independent artists, and many more.   Then party with the Vyzion Elite DJ’s!  They are guaranteed to keeping you dancing all night long.

For more information and VIP reservations, please contact Stephanie at 919-435-7060.

“Without direction there is no vision.  With Vyzion there IS direction”

(Vyzion is pronounced as vision)