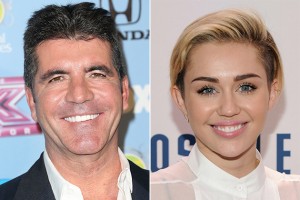 Simon Cowell the founder of the ‘X Factor‘, super entertainment genius and mastermind is pitching a ploy to hire Miley Cyrus as a judge on his mega hit show

. Simon Cowell revealed his intentions to the world December 18th to add her to the judging panel after it was made official that Demi Lovato will not be returning to the super successful talent show.

The ‘X Factor’ is hurting and the sagging ratings has been ongoing since it first aired. Simon Cowell know’s all too well that bringing Miley Cyrus to the show will bring in massive numbers and could potentially help take Miley Cyrus’s career to the next level. Miley just made Barbara Walters’ Most Fascinating People of 2013 and the X Factor collaboration could be what she needs to take her over the top in the entertainment world.

Could you image Miley Cyrus twerking on Simon Cowell??? You never know what would happen with this odd couple, according to Simon his reasons for making her his choice is that: “She’s got a big mouth!”. Miley has been known to speak her mind and has no fear of letting the world know that she does not care.

Simon Cowell reported that he is ok with Demi Lovato’s leaving the show. Simon stated that “I always thought with Demi it’d be a maximum of two years because she has the tour next year,” he told E! News. “People leave and they come back, we’re used to that on our show. So the door’s open.”
Hopefully this will happen and Miley Cyrus will not over sex things and show the world that she is truly a gifted talent and not a child star blooper.