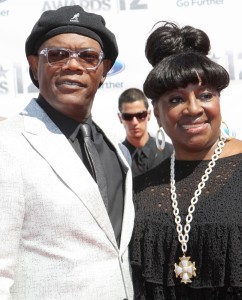 Jackson, in a joint statement with his wife LaTanya, has endorsed Clinton Young for mayor in the September 10 Mount Vernon Democratic primary. A Hollywood icon, Samuel L. Jackson movies have made more than $11.4 billion — making him the highest-grossing actor of all time, according to Opus Data. Having appeared in more than 100 films, his work include critically-acclaimed hits like Do The Right Thing, Pulp Fiction, A Time to Kill as well as his roles in blockbuster hits like the Star War prequels, and the Iron Man, Captain American and Avenger series.

The Jacksons’ joint statement said, “we are proud to endorse our good friend, Clinton Young, in his bid for Mayor of Mt. Vernon. We are assured that help is on the way for women who want to work. We are so proud also of his record as a fighter for quality and affordable day care.”

Added Young, “ LaTanya and Sam have been wonderful and supportive friends since college. He and I were at Morehouse together and LaTanya is a proud graduate of Spelman. It is well documented that both have addressed many important social issues.”

Healthy living and issues impacting women have more and more become the focus of the Jackson’s volunteering and giving in recent years. The couple established the Samuel & LaTanya R Jackson Foundation in 2009, and Mr. Jackson remarked in The Guardian at the time, “coming from a background where we’ve had to fight for our rights, LaTanya and I care very deeply about civil and human rights.” The Foundation donated $45,000 to the Spelman College Women’s Center in 2009.

A long time Mount Vernon resident, Clinton Young served as the 20th mayor of the city from 2008 to 2011. His administration has been praised for crime reduction, low taxes, and clean, efficient government. Clinton Young previously served on the Mount Vernon School Board from 1982-1992 and in the Westchester County Legislature from 1996-2007. Clinton Young is a graduate of famed Morehouse College in Atlanta, GA.