Chris Brown doesn’t call Rihanna out on the song but if he is talking about Rihanna he hit the nail on the head.

I mean look, there was the fling with Ashton Kutcher, I wrote about that. That was really farfetched.

But now what is this I am reading about Rihanna taking a picture with Tupac? I had to go look the picture up. If it’s not real the person did a 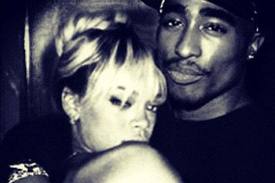 great job with Photoshop, because the look like they are together. Rihanna

See I have a conspiracy theory on the whole thing. I never believed that Tupac was dead. Here is why… You are not allowed to cremate a body in a murder investigation and then they spread his ashes out to sea in a private funeral. Why wouldn’t they have an open funeral for him so his fans could grieve? I honestly think Pac had more fans than Biggie. I remembered when Pac “died” I was in cosmetology school, I watched grown women break down crying, ALL DAY. So it made no sense that they didn’t let the fans honor him like in Biggies funeral.

Also supposedly in La Vegas it is not against the law to fake your own death. Now people have been talking about this “7 Day Theory”, well that’s too much for me. I like the info I gave better.  But I really don’t know if the picture of Rihanna and Tupac is really fake or not. But it is a very compelling picture. Makes you wonder. I remember seeing footage on Youtube of a supposedly Tupac hanging with The Outlaws outside of a recording studio. The person recording was sneaking the footage. When the people noticed the camera I remember someone saying “Hide Tupac”, and then they proceeded to shooing the cameraman away from the scene. It really intrigued me. It looked like Tupac, aged and all. That to me was the best footage.

Then there was a video shoot in Cuba that had Pac sitting in the back seat of the car. Looked like him to me too. But who really know but Pac his friends and family. They are the ones that really know whether or not Tupac is really dead. Wishful thinking wants him alive. It would be hot if he was. Defeat death and burry the ones who tried to murder him. It’s possible…

Well here are the two video’s I mentioned…