Rihanna Is Too Fast While Kanye Bust His @$$

I swear I try to be positive about these artists but it is so hard. So here goes. Rihanna is a mess. Word on the internet is the S&M singer has been sexting Joe Jonas the squeaky clean pop star. 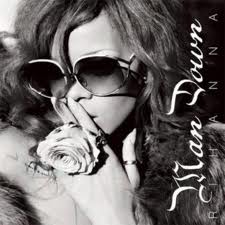 Really? Ok maybe they are the same age but she seems like the wolf going after the sheep. He seems a little too classy for her. She seems desperate. I don’t get it. Ok here comes my honest opinion. I didn’t like what Chris Brown did to her and I don’t condone any violence but I always thought there was more to the story then what Rihanna said. She played the victim roll well all too well. People believed it. Now look at her. No class at all. All her videos are raunchy. It’s just ridiculous. She met Joe when he did a song with Chris Brown.

See this goes to show you what she was thinking when she met him. Rihanna keeps laughing about how she wants to take him on the wildest ride of his life. I understand her sexual urges but she should remain a lady at all times. Not put her business out on the street. Especially being she is a Celebrity. Joe probably leaked all the texts and is laughing at her. I know I am. Now on to Kanye. While at a concert in Norway Kanye West falls flat on his back with his feet up in the air. He was performing All Of The Light from his album My Beautiful Dark Twisted Fantasy. It looked like he was jumping and he lost his footing. I admit I laughed at him and not with him. Usually it is the women that fall because of the heels. Like when Beyonce took here spill down the steps during her show. But wait, Drake took a spill to causing him to sprain his ankle. Now Kanye. Well at least he got back up and finished the song. Wonder if he bruised his ego?

Vyzion Internet Radio spins worldwide and national Dj mixes 24/7. So the party never stops! From the car the office the gym or your home you can listen to Vyzion radio anywhere. We offer free IPhone and Droid Apps Contact us at 1-800-957-9650.