Rihanna and Ciara are at it again.  The R&B divas seem headed for another heated exchange similar to their 2011 feud that broke out over Twitter after the two butted heads on the set of the show Fashion Police. 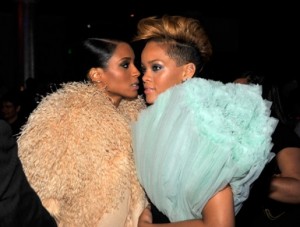 But the two quickly made amends shortly after the tweets.
You can view the 2011 feud here: http://www.eonline.com/news/228211/e-s-ground-zero-for-rihanna-ciara-twitter-smackdown

However, on Monday Ciara appeared to have relit the fire with her statement in an interview with Wild 94.9 radio stating:
“I don’t have beef with anybody, but I’m not going to be disrespected either. I wish her well,” said Ci. “I don’t know what her problem is. I think she’s nuts right now, like, whatever’s going on, because for me, it doesn’t make any sense. She has a lot of good things going on with herself. A lot of good things I’ve always said I’ve been happy for her. I don’t get it. I really don’t, but I wish her well. I wish her positivity.”
After the interview, it all seemed that everything was once again all lollipops and gumdrops until Ci went took to Twitter posting:

Somebody please point her in the right direction, cuz she clearly needs love and affection..:)

Somebody please point her in the right direction, cuz she clearly needs love and affection..:)

According to E! Online News, Rihanna, who is currently touring with her World Diamonds Tour, has not responded yet to Ci’s tweet as she is recovering from illness.

One thing is for sure though the always fiery Rihanna will have something to say.