Rihanna and Ashton Kutcher were they really together

. I know, I know I am late with this but WTH (what the hell)? Ashton Kutcher and Rihanna? That doesn’t even seen right. That’s not two puzzle pieces that fit. So apparently Ashton Kutcher was dating Rihanna or was booty calling Rihanna and then he dumped her because she lead the 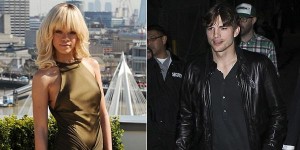 When Ashton Kutcher accused Rihanna of tipping off the paparazzi

got pissed off and got offended. She told him that she thought he called the paparazzi. Side bar… to be honest I can actually see Ashton calling the pap to let them know that he was having a fling with Rihanna. Well then again maybe Rihanna did to make Chris Brown jealous. But I thought that Chris and Rihanna had got back together.

See this celebrity stuff is a mess. That’s why I don’t want to be a celebrity. Keep my personal life personal.   This all happened March 20, 2012. I’m not just hearing about it but I have been thinking about it. I’m still smh (shaking my head) to the whole thing. Ashton Kutcher and Rihanna? They really don’t fit. I don’t even know if I believe the story. It’s too farfetched for me. Then there is Demi Moore that is supposed to be upset over the sex rumors. Umm… why? Didn’t she leave Ashton Kutcher? So why is she upset? You already knew what his character was like.

Well that’s if this story is true. Demi is supposed to be humiliated that Ashton was linked to another celebrity just a few weeks after she came out of rehab. Wait what does one have to do with the other. Who cares if he’s with another celeb after she came out of rehab? Would Demi have felt better if he was hooking up with a nobody? Does Demi not expect Ashton Kutcher to move on with his life or is he supposed to ponder over her the rest of his like. Nowadays I think too many celebs fabricate these stories just to get some publicity.

It’s said that the only reason why Rihanna wanted to learn Kabbalah from him. I’m not even going to comment on Kabbalah, to each his own. But like I said this seems a little far fetched to me. Rihanna just don’t seem like Ashton’s type. I like her better with Chris and the fact that Ashton Kutcher was sneaking her to his house shows the lack of respect. Booty call is never about respect.

Well maybe Rihanna is really trying to break into acting. I’ve heard of many people sleeping their way into different fields, like Jennifer Lopez. If she did it than maybe anyone can.  Well, that’s my thought on the matter. On to the next story…