In a world full of musicians, only a few can claim to be “stars.” In the grand scheme of things, it has to be this way. The music industry is tough and weeds out the undesirables. You’ve got to have thick skin to have a thick wallet to be the richest most powerful musicians. 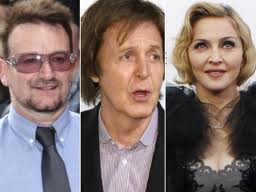 According to MTV Hive, Bono is the richest rock star in history. His net worth? A staggering $1 billion. That’s not just rich for a musician. That’s rich for anyone in and out of the business world – period. In case the name sounds familiar, it’s because it is. Bono is the lead singer for that British band, U2. He’s got a long list of awards after his name and has done so many charity events, it’s nearly impossible to count them all.

The former guitarist for the Beatles. Yes, that Paul McCartney – except these days it’s “Sir Paul McCartney. His net worth isn’t far behind Bono’s at $800 million. He’s also in the Guinness Book of World Records as “the most successful composer and recording artist of all time” and the “most successful songwriter.”

Elton John’s career spans four decades. He’s sold more than 250 million records and is one of the most successful singers and songwriters of all time. In 1997, he did a reboot of his “Candle in the Wind” song. The result? It sold over 33 million copies and became the best-selling single in the history of the UK singles Chart (as well as the US Billboard Hot 100). Oh, his net worth? a paltry $355 million.

The lead singer for The Rolling Stones has a net worth of $300 million, but he’s got more than just money. He’s got fame, and he’s one of the few musicians who has successfully floated between the  music and film industry.

Sting’s net worth is about $180 Million. Like many musicians of his caliber, he’s got a long list of awards for his talent – including 16 Grammy Awards. He’s been a solo artist for a while now, but you probably remember him from The Police. He’s also done a lot of charity work (which hasn’t hurt his fame).

Richards is the other founding member of the Rolling Stones with a net worth of $272 million and has shared much of the success that Jagger has (naturally).

Madonna is one of the highest paid female artists of all time. The material girl has an estimated net worth of about $650 million. She’s also an entrepreneur and philanthropist.

Mariah Carey has an estimated net worth of about $500 million. She’s been the recipient of numerous awards including 5 Grammys, 17 World Music Awards, 11 American Music Awards, and 31 Billboard Music Awards.

With an estimated net worth of $460 million, Jay-Z is one of the most successful rappers, ever. He’s a musician, an entrepreneur, a philanthropist, and even used his influence in 2008 to try to increase voter participation.

Sean “Diddy” Combs boasts a net worth of about $550 million. He’s definitely one of the richest and not hurting for money

. A successful rapper, singer, record producer, actor, and men’s fashion designer, he’s a man of many talents. His influence has made (and broken) careers in the music industry.