What can I say, it’s ridiculous. So Ray J gets on the radio show on Power 105.1 The Breakfast club and talks about a beef he just had with 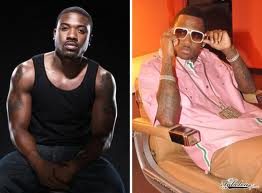 Fabulous. Saying he punched Fab in the face and Fab did nothing but fall. But here is where it all started, Floyd Mayweather had a 24/7 show about his up and coming fight with Victor Ortiz (which by the way Floyd won and they had some drama behind it). So Ray J was at Floyd’s house and Floyd said he was about to have a concert in his house and the camera goes to Ray J sitting behind the piano. Ray J was singing. So Fabulous was on twitter making jokes about it. Nothing vindictive Fab said. Just out of fun. So Fab said that he was in Las Vegas for the fight and Diddy threw a dinner. Fab said Ray J showed up at the dinner and they were all laughing about the show. Kevin Hart, Diddy and DJ Clue were all there laughing about twitter. Ray J said Fab got him good on twitter and laughed about it.

Fab said he told Ray J to not do any shows in someone’s living room or their basement. Fab was still making a joke. He said he never knew Ray J took the situation seriously. Fab had a show at the palms with Jada Kiss and Styles P, he see’s Ray J and Ray J said he would be at the show so Fab was like cool. Later on, before Fab’s show, Fab and Ray J got into an altercation where supposedly Ray J punched Fab in the face. Now they have footage of that incident. Honestly all you can see is Ray and 50 Cent in the footage. You can’t see Fab you can’t tell if Ray J hit Fab. You can’t see anything. But this shows that Ray J lacks a level of maturity. All of this over Fab making a joke on twitter. Fortunately I already follow both Ray J and Fab on twitter and I saw what Fab wrote and it wasn’t that serious. Fab said that Ray J was on coke and alcohol. They way Ray J ranted and raved on the Breakfast Show he sounds like he is on something. Plus all Ray kept talking about is how many cars he has. Doesn’t Ray realize that material doesn’t make a person better? Out of this whole situation the one that looks like a fool is Ray. The loudest one in the room is the weakest one in the room. I like the fact that Fab was still laughing about the whole incident. Really Ray? Now you want to be a thug. Thug life is not where it’s at. Eventually the way he is running his mouth someone will shut it. Ray doesn’t know anything about the street and I have seen his crew they are a bunch of little boys. The situation it too funny for me. I hope it’s over, but with Ray J’s pride it probably won’t be… can’t we just all get along?