The seeds of Peter Gozzi’s musical career were sewed long before he was even able to talk. Born into a very musical family in Queens, NY, it didn’t take much to spark the passion inside his heart. His inventive style and slick grooves 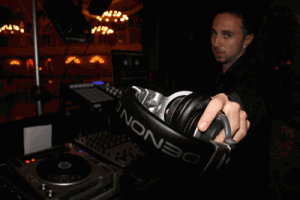 behind a drum set have found him work with some of the most respected entertainers in the world. Among celebrity artist’s include Tony Bennett, Bucky Pizarelli, Frank Belluci, and Harold Jones. He has also worked with dance music artists, such as Reina Gee, and Lucas Prata. These are just a few of the stars on Gozzi’s decorated resume as a musician.

However, his lengthy performance credits are only a portion of his accolades. He felt the rhythm of his city, the urban flavor only a place like New York could possess. Naturally, Gozzi took his music to places, the confines of a drum set wouldn’t allow. As a result, he has become one of the hottest DJ’s in the New York area. His love for music has gave him the inspiration of Producing and DJing House, Progressive, Dutch and Top 40 remixed music. Whether it’d be him performing at New York City’s Pacha Night Club, Elements Night Club, District 36, Imperial Night Club, and many more, Gozzi hits the crowd hard with his original tracks like you’ve never heard them before.

If you haven’t seen him at work with today’s hottest celebrities such as DJ Serg, Frankie Vasquez, Glenn Friscia, Ted Smooth, DJ Skribble, and with entertainment companies such as Twice as Good Ent., Satisfaction Guaranteed Ent., Hart to Hart Ent., DanceJock Ent., or doing his own thing with his built up company Live Sounds Ent. than you just aren’t getting enough. Whether he is commanding the beat behind the kit, or hitting you with some of the hardest bangers behind the ones and twos, Gozzi is sure to make a lasting impression anywhere he performs.