The church was in grid lock for days because the Cardinals are leaning towards a Pope that can put on a better face for the Catholic Church. The Pope has a huge 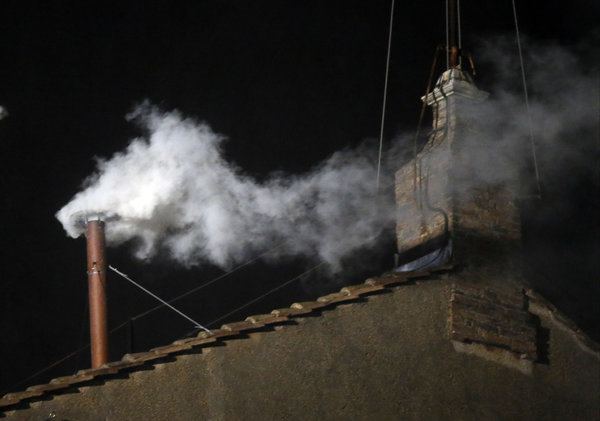 challenge ahead of him and is expected to be younger and more business savvy.

The Catholic Chruch has been rocked with scandal for years and a champion Pope is necessary to lead the 1.2 billion Catholics worldwide. President Obama spoke and stated that it would be great to have a American Catholic Pope and that an American Pope could lead just as good as a European Pope.
There were thousands of Catholics present when the white smoke signal became visible. There has been no word as of yet of who is the Pope.

The world should know as soon as the Pope’s new name is selected and the new name is Pope Francis.

This election was very tedious and last 2 day and 5 ballots. This is due to the political ramifications of this selection. The US government is watching this closely and has had many negative run-ins with the Catholic Church from the Obama administration over birth control and marriage. It is going to be very interesting to see which way the new Pope leans. The question will be how Pope Francis handle the sexual abuse allegations and clean up the Catholic Church image.

The Catholic Church and Vatican could expect sweeping changes From Pope Francis . The question will be it stick to biblical principles or lean towards pressure to lean towards the Obama changes that go against the church’s biblical principles. It has been over 600 yrs since a Pope has stepped down the way Pope Benedict did. The new Pope will have big challenges.

Vyzion internet Radio spins worldwide and national Dj mixes 24/7. So the party never stops! From the car the office the gym or your home you can listen to Vyzion radio anywhere. Vyzion Internet Radio is comprised of an international team that is delivering the best of live radio and Internet Radio. We offer free IPhone and Droid Apps Contact us at 704-240-8939. https://vyzionradio.com/