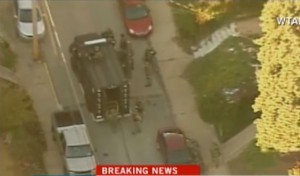 One student was grazed in the head, another was struck in the neck and shoulder, and a third was hit in the leg and foot, Diane Richards spokesperson for the Pittsburgh police department stated that
“We don’t know if there were multiple shooters at this time,” Richards said. “No one is talking at this time.”

One student is listed in stable condition at the Allegheny General Hospital; according to hospital resources the injuries are not life-threatening.

The shooting happened at Brashear High School at or about at 2:46 p.m., according to Ebony Pugh, a spokesperson for the Pittsburgh’s public school system. A middle school is located nearby and did not report any incidents.

The gunman came out of the woods while the students were walking to their cars and shot all three of them. Two of the victims managed to run back to the school to notify the authorities. The identities of the victims were not released. Richards said the shooting may have been in “retaliation” for an earlier incident but did not elaborate. This probably was committed by another student but no details were given or if the victims even saw the gunman.

The Pittsburgh police department is on full alert looking for the gunmen. None of the other students at the school were injured and were reported as to being all safe.