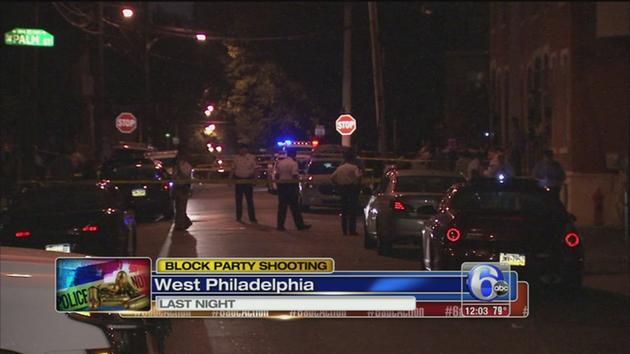 time around 10pm along the 4100 block of Ogden Street Saturday night for a Father’s Day Block Party.  The 2 armed suspects, according to Philadelphia Police Lt. John Walker, “It looks like they just randomly fired down the street and hit anyone in their way.”  One witness, Valerie Jones, says, “We just heard shots and I got up, I picked my baby up and I just started running.”

Investigators said a total of 10 people were struck with birdshot from the shotgun. “It was just a terrible situation,” said Walker. Shotgun pellets struck Ashley, a 1-year-old girl, in the neck and chest, said Jones, the girl’s mother, who was also shot in the arm. “I panicked and I just started screaming, ‘my baby got shot, my baby got shot,'” said Jones. Luckily, Ashley was back to sipping on juice boxes a day after the shooting.

Gunfire also struck 11- and 12-year-old boys. All three children were treated at the Children’s Hospital of Philadelphia in stable condition.

For more info on this story, please visit nbcphiladelphia.com

What is going on with all the shootings and hate? How could anyone just shoot randomly into a crowd of families celebrating father’s? We want to hear from you!