Philadelphia inspector Ronald Wagenhoffer, 52, was found dead in his truck after 9 p.m. 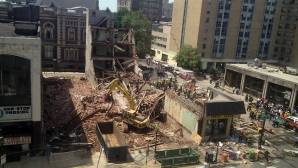 Wagenhoffer inspected the four story building that collapsed last Thursday in downtown Philadelphia that killed six, including one of the businesses shop owners.

Officials state he was found in his truck with a gunshot wound to the chest, which is believed to be self-inflicted. He was employed by the city for 16 years. “We’re a city in deep and profound mourning. With the building collapse a week ago we have now lost seven lives with this tragedy,” Deputy Mayor Everett Gillison said today. “We’re still burying people from last week, now we have to bury someone from today.”

The city of Philadelpia  is currently facing much criticism for not inspecting the demolition site where the building collapsed. Gilson tells the press that Wagenoffer did nothing wrong, he had only done his job.

Co-workers state that there did not seem to be any disturbance in Wagenoffer’s behavior. He continued to come to work, and continue his regular duties. The commissioner of buildings inspection department made an attempt to reach out Wagenoffer, but had not gotten the chance to speak to him.

Gillison also emphasized that Wagenoffer was not being targeted in the investigation, but a construction crew member had been arrested for allegedly operating a crane under the use of controlled substances when the Philadelphia buildings collapsed.

To read more on this story, visit abcnews.go.com.