A common topic for women today is almost always pay. It tends to have an affect on how we spend money, where we live, our stability, safety, what we’re able to purchase and how we’re able to sustain life. There are continued debates raging on the pay that 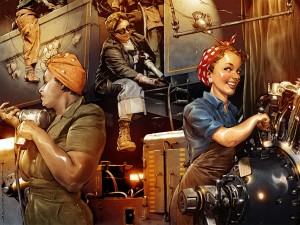 women are entitled to receive based upon levels of education and work history; in comparison to their male counter parts. Some men argue that they’re being placed out of jobs by women and some women argue that the misogyny of the work place completely debilitates their ability to earn a decent (and fair) wage. In which both statements could be viewed as ‘fact’, depending upon the manner in which you chose to disseminate the statistical data provided on pay wages for women.

But to better understand wage for women, you have to explore the history of pay for women working in this country; and WHY it’s so controversial. Because the attitudes of pay for women pre-dates any legislation signed into action by the current Obama Administration for equal pay.

During the 1930’s Great Depression, jobs where so scarce that 26 states incorporated laws prohibiting the employment of married women. Yes, you read that correctly! If you where a married woman it was against the law for you to become gainfully employed.

In 1932 Congress passed the Federal Economy Act (which, through explicit language) had the effect of excluding a married woman from working in civil service if her husband did as well.  26 states/local governments considered and implemented laws that bared married women from working in government jobs in the early 1930s.  As a result, public school and transportation systems nationwide began to fire and refuse to hire married women. Banks, insurance and public utilities companies as well as railways also discriminated against married women in their hiring practices. And traditional labor unions almost entirely excluded women. The sentiment behind the laws was that a married women (whom presumably had a husband to take care of her) should not ‘steal’ a job from a man. Although, it was acceptable for a single woman to have a job, these positions where of lower pay and where typically considered ‘women’s work’.

It was so bad that (in response to poverty and unemployment during the Depression) white and black women began to organize into local groups that worked to control the price of rent and food, procure government relief payments, and create employment opportunities; following in the footsteps of the early 20th century meat and rent strikes in New York. Unemployed Councils emerged in cities across the country that included women and men in neighborhood-based groups, who organized protests of evictions and picketed government relief offices for more unemployment benefits. “The Housewives’ Leagues” also emerged in both white and black neighborhoods nationwide, organizing strikes and boycotts of meat shops that charged unfairly high prices in the Depression economy.

Caucasian women who did find employment worked as salesgirls, beauticians, schoolteachers, secretaries and nurses.  While the job market for African American women was even more so restricted, being limited too employment as serving maids, cooks or laundresses.

The onslaught of World War II dramatically changed this work place dynamic in respects to gender. With thousands of American men leaving civilian jobs to enter into military service, the factories needed around the clock support to provide much needed supplies for American troops and allies. In efforts to eradicate this issue, the stigma placed upon women ‘stealing jobs’ from men was lifted in attempts to combat the labor shortage. It was even seen as patriotic for a woman (married and/or single) to work. And by the fall of 1943 some 17 million women where working in non-traditional career fields making up one-third of the total U.S. work force.

An estimated 5 Million of these women worked in defense factories, no thanks to the propaganda machine that encouraged women to start working in traditionally male-dominated career fields. Which brought forward the birth of the  “Rosie The Riveter” character. This All American, working middle class female portrayal was a product of the U.S. government working closely with advertising agencies, women’s magazines, radio producers and movie marketers to persuade women into taking jobs outside of the home.

“Rosie” became an American Icon that could be seen on posters and mentioned in popular songs that would promote female patriotism. She was typically depicted as being a temporary worker, white middle-class housewife who’d left her post of domesticated mother-hood to serve her country honorably. But! Would be eager to return to housework and domesticated life after the work.

But this campaign backfired, for the simple fact that a large percentage (nearly 80%) of women who held wartime industrial jobs had always been employed prior to the war. And they where more than glad to stay in these positions even after the return of troops from combat. These women welcomed the increased income, the new found independence, a healthy boost in self-esteem and a since of accomplishment that came with being gainfully employed. They even referred to themselves as “The Hidden Army” that was helping to win the war.

After the war, there was an increased need to convince these women (via the same media outlets) of the importance of returning back to their rightful place in the home. It was believed that cooking, cleaning, and raising children was (and always will be) their main lot in life. So the idea of women remaining in the work force (stealing jobs from men) was one met with distain. Even though the media bombarded society with such female domestication programing, in reality more women where entering the work force.  Not in heavy industrial jobs, but in stead in clerical, teaching, health-related jobs and light manufacturing.

And estimated 2 Million women worked in the 1950’s that had worked during the war and by the 1960’s 40% of women held full or part-time jobs. 30% of married women worked in 1960’s while an estimated 40% of working women had school-aged children.

Ideally many women worked so that their families could enjoy the fruits of labor that created what many considered to be the “American Dream” as being portrayed in the media. Families with two incomes to pay for homes, cars and vacations was what most middle-class TV families often enjoyed. And led many women to now understand their new role in the work force.

Thus the introduction of the infamous pay gap in gender wages……

Fast forward to present day, we continue to hear that men are still being paid more than women to date. Which was initially believed to be an incentive to discourage women from working all together.

Now, does this means that woman or paid less because they chose lower paying employment? Yes and no. Keep in mind that more women work part-time than men. Many while assuming the responsibility as primary care-giver for children or enrolled in higher institutes of education.  But there’s still some companies, entities and governing bodies that have strategically placed inconsistences within their doctrine that ensures women are on average paid anywhere from 90% to almost 50% less than that of their male counter parts.

President Roosevelt signs The New Deal programs initiated when he took office in 1933. Which greatly changed women’s experience in the work force and in labor unions. The major elements of the New Deal were the National Recovery Administration (NRA) with its industrial codes, the Wagner Act, which placed the federal government behind labor unions and collective bargaining, the Works Progress Administration (WPA), which created government jobs for unemployed men and women, and the Social Security Program, which initiated retirement pensions, disability insurance, and payments for single mothers with dependent children. Also, The Fair Labor Standards Act set minimum wage and maximum hours standards for industrial workers.

Either way, some factors that contribute to the pay gap that must me taken into consideration are as follows:

Age: Median weekly earnings were highest for women age 35 to 64 in 2012, with little difference in the earnings:

So the pay disparity for women are just as diverse at the feminist issues being addressed in favor of women receiving equal to that of what men earn. And they’re linked to ethnicity, social class and levels of education.