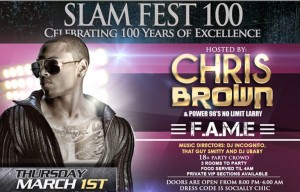 NC Music Factory on Thurs., March 1 during the annual CIAA Tournament. This huge event brings over 100,000 people to Charlotte Feb. 27th through March 4th. Vyzion Entertainment will be handling the multi-media of No Limit Larry in preparation for his Nation Wide reality show. Soul Of the South Network will also be in attendance.

Reel Works Studio inside of the NC Music Factory will be transformed into a lush four elevation night club during the tournament weekend. There are over 25 deluxe VIP areas, two rooms and two DJs. Get tickets and learn more about the event at www.slamfest100.com.

Nolimit will be with a host of celebrities starting next Thursday. Here’s the schedule:

About No Limit Larry

No Limit Larry is host of CBS Radio’s morning show – The No Limit Larry & The Morning Maddhouse on WPEG Power 98. During his tenure in the business, Larry has become one of the most recognizable names in radio. He’s earned Personality of the Year twice by Retail and Records, number 23 in the Source Magazine’s Top 30 Top Radio Power DJs and Creative Loafing Personality of the Year award.  www.noleezy.com / @noleezy. No Limit Larry is teamed with Vyzion Entertainment North Carolinas primier Muit-Media comapny that delivers the best in video production, website design and Search Engine Optimization.