Nigel Hall is an outstanding musician, singer, song writer, keyboard player from Washington D.C.. Dj Capitol K recently had an opportunity to get an exclusive interview with Nigel for his talk show on Vyzion radio “On Demand” titled “The ReCAP”. This interview gave us a very in-depth view into the life and music career of Nigel Hall.

Nigel Hall was exposed to music at a very young age and first became intrigued to be a musician at the age of 4. He 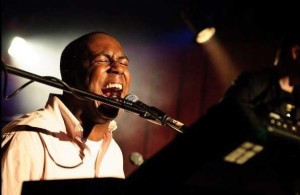 comes from a very musical family that exposed him to a diverse list of artist and styles of music. Everything from Jazz, R&B, Funk, Rock, Latin, Hip Hop and Soul. His father was a musician and both his mother and father had a vast collection of records that Nigel emerged his self in. Nigel has studied the greats and played in bands, and recorded with a lot of legends and his personal hero’s and shero’s over the years as well. He has toured and collaborated with the likes of The Nth Power, Warren Haynes Band, Jon Cleary, Soulive, Oteil Burbridge and Roosevelt Collier, Ledisi, the Soul Rebels, Lettuce, The Atlanta Collective, Questlove and many many more. Nigel Hall has toured the country and performed all over the U.S. and abroad. Born and raised in the Nations Capital Washington, D.C. he has also resided in Portland, Maine, New York and has recently relocated to New Orleans, La. where he is currently settled, recently married and happy to call home.

Nigel Hall has recently released his latest project titled “Ladies & Gentlemen… Nigel Hall” Produced by Eric Krasno in collaboration with Feel Music, Inc & Round Hill Records. This project has 10 soulful tracks that grow on you one at a time. Songs like “Gimme A Sign”, “Don’t Change For Me”, “Lay Away” and “Never Let You Go”. In Nigel Halls’ exclusive interview with Dj Capitol K for “The ReCAP” Vyzion radio “On Demand” he discussed his past works and also his plans for the future. Dj Capitol K says “This was a very personal interview for me. I have a great respect for Nigel and his talent. I have watched him grow into a very accomplished musician, man, father and husband. It was sincerely a pleasure to have the opportunity to get this interview with him. I wish him success in his career and life”.

Make sure that you Download the free APP for Vyzion Radio available for Android and iPhone and Check out the “The ReCAP” “On Demand” with Dj Capitol K with his detailed discussion with the extremely soulful and talented Nigel Hall. “The ReCAP” is set to relaunch on February 1st 2016 and you will not want to miss this interview.