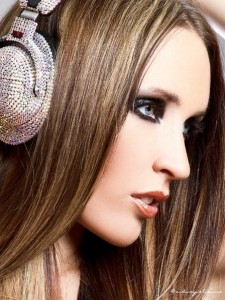 Donald Trump’s popular television show, where she performed every Friday night for an audience of celebrity high profile figures and VIP guests.

DJ Vinyla is also a top DJ in America’s first and only Model Dj agency. DJ Vinyla has worked for years in Russia and in the US as a DJ, mixing music in an unique style all her own which focuses on blending Vocals, Funky, House, progressive House and Tribal House styles.

She receives attention from such publications as the New York Post, Grazia, Insiders and Karavan. She also wins the admiration of superstars like Joel Simon, president and CEO of JSM Music who says that “DJ Vinyla is a star of the club and elite social scenes in New York City”. Vinyla Charismatic stage presence and graceful energetic performances, have propelled her to the forefront of the entertainment industry.

A model DJ does not simply provide the background music that enhancers the success of a high-profile event for a major hotel, nightclub or corporation. She is responsible for creating the audio and visual mood of the production and aligning it to the overall goals and brand identity of the sponsoring venue or company.

Playing with numerous famous colleagues at WMC Miami DJ Vinyla quickly rose up the ranks of the entertainment community there to become one of the most promising international Female DJ’s.

Her passion is house music with vocals and her most recent gigs include X-hibitions Bar Harrah’s Casino, Rivington Hotel, Kiss and Fly, Buddha Bar, Love, Hudson Terrace, Trump Tower, Empire Hotel Rooftop, Cabana in The Maritime Hotel, and Tavern on the Green. She was most recently a resident at “Bikini Bravo”, voted one of the top 3 daytime parties in NYC by The NY Post.