What You Missed at the Vyzion Internet Radio Kick Off Party

The city was New York. The place was the Empire Room at the bottom of the Empire State Building. The date was Saturday night October 22, 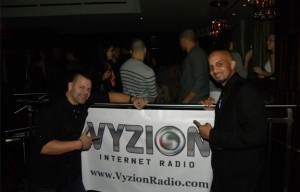 2011. The event was the Vyzion Internet Radio kick off party. Yes, it was a night to remember.

Just in case you don’t know, Vyzion knows how to throw a party. All you need to bring is your party attitude. Vssss up!

Vyzion Internet Radio’s launch party in New York City went off like it was supposed to as an off the hook fully fledged New York party with all the rightfavors. As camera man Victor Chavez and I worked our way around the room to get quick interviews, we saw it all: Champagne popping and flying through the room with sparklers lighting the way from the bottle tops; DJ Frankie C from mix99radiotearing up the first half of the night with his wide selection of dance and R&B with Rhode Island mix tape artist from PMT records, Krook Rock, hyping the room on the mic then DJ Dennis the Menace from mix99radio killing it in the second half of the night with his slamming mix of hip hop and reggeaton; Brenda K Starr in the VIP section dancing and partying with copies of her cd single Body of Poof; rapper Panda from the label 4 The Love of Music sweating on the dance floor while rappers Ali Starr from Island Def Jam and Sillawet along with their management team Full Moon chilled out in the corner; and co-owners of Vyzion Radio, Eric Bostic and Greg Bailey were working the room making sure everyone was having a good time. The place was filled with some of the most beautiful people and I can safely say everyone had a good time.

Let me set up this night for you. I woke up that morning excited about the coming night. I had already scheduled my day around leaving my home in Deptford New Jersey at 6pm and hitting the NJ Turnpike. I had annoyed my wife by asking her to wash my pink shirt then deciding to go with the red one. I had to look my best. The two hour ride was made quicker by great conversation with Damon Pinkney and Marcus Merritt owners of Spin live weekly internet magazine and Dave Thompson President of the independent label 4 The Love Of Music. We listened to the new upcoming cd of my band Straight Truth and critiqued it before release which made it a very productive ride. We come out of Lincoln Tunnel and ride through New York City to get to the Empire State Building. Riding through the city pumped me up for the party. Seeing the lights and the people riding down 7th Street and 5th Street then passing Broadway was magical. I was like a kid in a candy store. The light and movement of the city captivated me but that is the magic of New York the city that never sleeps and with this kick off party for Vyzion tonight was going to be no exception. We got to the swank Empire Room in the Empire State Building where DJ Frankie C and Quest Kuriaki were setting up for the night and were greeted by Greg Bailey and Eric Bostic and from there we watched the room fill with New Yorkers welcoming Vyzion Radio to town. I also witness a re-union of two classmates when Laura Grier and Greg Bailey both from Lincolnton NC were re-united after years. Laura Grier and three of her friend flew in from North Carolina to enjoy and witness the birth of a mulit-media giant.

The goal was to let New York know that Vyzion Internet Radio was in town and they are here to stay. With the message sent loud and clear from the Empire Room and if anyone missed it all they had to do was pick up the NY Daily News and read about it. That’s how it’s done with a broad message that the new sheriff just hit town and he’s called Vyzion Radio. V’sss up!