NASA Antares Rocket launch was a total failure. Unlike previous NASA disasters, this current one included no 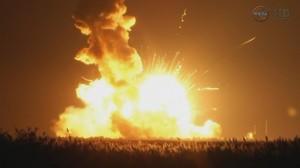 However, the space rocket, which was taking supplies to the international space station, exploded before it actually left the Earth. It exploded just six seconds after liftoff barely leaving the launch pad at Wallops Island.

Debris and fire covered the NASA launch complex, but the closest living person was miles away at the media complex. There were no prior concerns to the explosion, which was the second attempt to launch this rocket.

If any debris from the NASA explosion lands near you, do not touch it as hazardous material is on board. Contact NASA officials immediately.

The rocket contained over 5 thousand pounds the equivalent of thousands of dollars worth of experiment supplies for scientists and school children being sent to the space station. Those people are obviously very upset at the loss.