Was the Death of Trayvon Martin Justified or Racist

Was the death of Trayvon Martin Justified or Racist is the big question??? I just heard about the store on March 20, 2010 and I was shocked and appalled. Trayvon Martin was murdered in the fatal Feb. 26 shooting by George Zimmerman, the self-appointed neighborhood watch in Sanford Florida. This man took his job a little bit too seriously. He would patrol 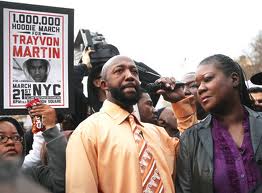 Zimmerman wasn’t supposed to follow Trayvon Martin but he continued to anyway. George Zimmerman didn’t act scared or nervous at all. But according to Trayvon Martin’s girlfriend, Trayvon was scared. He was on the phone with her at the time Zimmerman was following him. Trayvon told his girlfriend that this man was following him and she told him to run but he said he was going to walk fast. The teen’s girlfriend said she could hear someone confronting Trayvon.

George Zimmerman automatically assumed Trayvon was up to no good. So Zimmerman confronted him and they got into an altercation. Supposedly Trayvon was screaming for help but witnesses were scared to come out of their house to help. George Zimmerman shot and killed Trayvon Martin who was unarmed.  But Zimmerman said that Trayvon was the aggressor — and that he opened fire in self-defense. Trayvon was only carrying a bag of Skittles and a can of ice tea. That’s it. I am truly upset and saddened by this whole incident. I am fighting tears as I write this. This man made a bad decision and wasn’t charge for shooting this child. Trayvon was only 17 years in age. He was actually there visiting his father whom lived in the gated community. Trayvon walked to the store to get some candy for his little brother and walking back he got comforted by Zimmerman.

Zimmerman assumed that Trayvon was one of the teenagers that have been breaking into the houses. I am figuring that every black teen that walks thru the neighborhood would have been a suspect. But Zimmerman called the cops on many occasions about different things going on in the neighborhood. Listening to all his call he seemed like the little old lady that sits in her window and is in everyone’s business. The calls are crazy. So when did the neighborhood watch people start carrying a gun and when was it ok for someone to be a vigilante, because that is what Zimmerman seems to be doing. He took the law into his own hands and took a young life because of it. It seems like George  Zimmerman was really looking for a reason to use his gun and he got that reason.

Zimmerman didn’t get arrested, they didn’t take his gun and he didn’t get charge. Now when do they not take the murder weapon? We all know that if a black man had shot a white teen he would have been taken into custody. So now the FBI and Florida Grand Jury will be investigating the murder. To me it’s not a killing. Zimmerman murdered that child. Now Al Sharpton is in Florida railing for the family’s rights. I hope Zimmerman gets everything he deserves.