. The tour will start in San Diego California. Hiphop 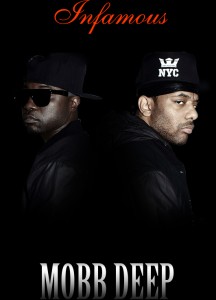 Legends Prodigy and Havoc will perform on 32 dates in major cities like Washington D.C., Miami, New Orleans, Dallas, Hollywood, Oakland, Seattle, and Denver ending in Chicago on May 2nd before they start their Hiphop campaign in Europe this summer.

This will be the first time in over 9 years that the Hiphop Legends have performed outside of the US together.
According to the Huffington Post Havoc reported that the beef is over and that “he didn’t mean it because he was bugging” he also stated that he went crazy and that Prodigy handled it like a champ. Prodigy stated that “it didn’t take long to fix because Havoc is his brother”

It is great to see two of the greatest hiphop legends getting back together and helping the struggling hiphop industry. It is yet to be seen on how the public will accept or if they can regain their greatness.

Mobb Deep’s new album will drop at the same time as the tour, The Infamous Mobb Deep, due out in Spring 2014 via Infamous Records. It will be a double-disc CD, featuring unreleased tracks from their original 1995 debut and the digitally re-mastered version of the group’s classic album along with a brand new self-titled CD