Miley Cyrus is known for speaking her mind. Miley Cyrus has gone on to subtly suggest that Taylor Swift is a hypocrite 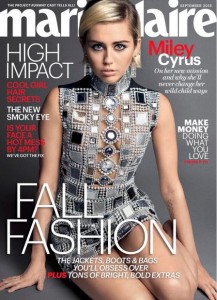 Kendrick Lamar to get away using sex and drugs as music subjects and not get criticized the way she did.

Miley Cyrus seemed to point that others can to do what she has done and they get no public backlash. Miley Cyrus went from being America’s sweetheart to America’s bad girl seemingly overnight. One might say and give credit to Miley Cyrus for just coming of age and pointing out the differences of why some can and some can’t.

Miley Cyrus is set to appear in the Marie Claire issue this September 2015. She is also featured on the cover. Miley seems to feel that Taylor Swift and Kendrick Lamar can get away with Bad Blood , drugs guns and violence and she gets demonized for a few naked pics and using drugs in public.

Miley Cyrus was quoted as saying “I don’t get the violence revenge thing,” Miley Cyrus, who has been both celebrated and criticized for her own racy looks and antics, told the magazine. “That’s supposed to be a good example?” the 22-year-old added. “And I’m a bad role model because I’m running around with my t-tties out? I’m not sure how t-tties are worse than guns.”

“There is so much sexism, ageism, you name it,” she added. “Kendrick Lamar sings about LSD and he’s cool. I do it and I’m a druggie whore.” It has yet to be determined how Taylor Swift or Kendrick Lamar will take Miley Cyrus and her comments. This could potentially blow up bigger than the Taylor Swift, Nikki ménage and Katie Perry beef. You can pretty much expect that Miley Cyrus would not apologize for back down. Buckle your seatbelts. This will be an interesting new segment in Miley Cyrus’s outspoken career..